After fighting under the UFC banner for over a decade, Carlos Condit knows what's at stake, in the final bout of his current contract.

Carlos Condit is coming off a win. But, since ‘The Natural Born Killer’ has had plenty of setbacks in recent years, he knows there’s “a lot riding” on his fight this Saturday with Matt Brown. 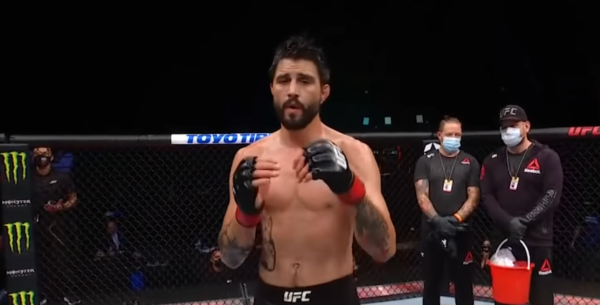 Condit understands a lot’s on the line

The 36-year-old Condit is booked to fight the fellow, former welterweight contender Brown this Saturday at UFC on ABC 1. In Condit’s last outing, this past October, he worked his way to a decision win over Court McGee.

That victory, however, was Condit’s first since 2015. Heading into the bout, the former interim champ had lost five in a row.

So, while talking with the media this week about what’s at stake this Saturday, in what is the last bout on his contract, Condit (31-13) said this (quotes via MMA Junkie).

“I have my mind supremely focused on this fight getting this thing handled,” Condit said.

“There’s a lot riding on this fight – a lot of guys getting cut, a lot of people on the chopping block.

“To mention the losing streak, I’ve won one of my last six, so it’s not a great record for my last contract.

I’m up for renegotiation, too, so a lot going on in this respect.”

And, while talking about his objective for the Brown (22-17) fight specifically, Condit stated:

“I want to finish Matt Brown,” Condit said. “It doesn’t matter (how).

So, it will be interesting to see what comes next for Condit, win or lose.

Since it’s the last bout on his deal, we could see him move to another promotion, even if he beats Brown. Of course, a win will put him in a much better position at the bargaining table.

A few weeks ago, following the surprising news Yoel Romero had been released, Dana White said that up to as many as 60 fighters could be cut.

So, given how many younger, cheaper fighters have been signed by the UFC via Dana White’s Contender Series, there’s reasons to question if Condit will be back.

All that said, Condit has long been a fan favorite, and he’s a really exciting fighter to watch. So, maybe we’ll see the UFC ink him to another deal.

UFC on ABC 1 will take place on Yas Island in Abu Dhabi.