Ahead of Israel Adesanya's jump to light heavyweight at UFC 259, contender Aleksandar Rakic has delivered a warning to the middleweight champ.

Several things have to fall into place before a fight between Israel Adesanya and Aleksandar Rakic can materialize. But, it sounds like the latter will be rooting for the middleweight champ when he battles light heavyweight king, Jan Blachowicz. 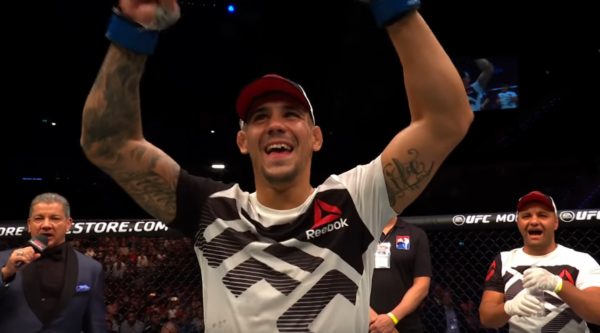 Rakic has a warning for Adesanya

After weeks of speculation as to if and when a bout between Adesanya and Blachowicz would happen, recently it was announced the champions will fight at UFC 259, March 6th. That same night, Rakic will take on fellow light heavyweight contender, Thiago Santos.

Since Adesanya hasn’t fought at 205 in the UFC yet, and because of the recent run Glover Teixeira has been on, some thought the latter should be next for Blachowicz. But, while speaking to MMA Junkie recently, Rakic had this to say about Adesanya’s move to light heavyweight.

“Glover is an amazing fighter and he’s on a five-fight winning streak and for me, he deserves the title shot,” Rakic said.

“But the UFC decides what they want and for the promotion and for the marketing, of course, it’s Adesanya and Blachowicz.

“We have like nine kilos – from 84 kgs to 93 kgs. This is nine kilos in between and those nine kilos, you can feel the power.

The light heavyweight division, we are strong, but we are also fast. I don’t want to say middleweights aren’t strong, but it’s gonna be very interesting.”

The 28-year-old, Austrian fighter also had this to say.

“If he becomes the champion and he’s a two-division champion, then he’s gonna need to face me and it’s not gonna be a good night for him. All his legacy and all his credit is gonna come to me.”

There’s no question that Teixeira deserves to fight for the belt. But, the fact the UFC went in this direction is no surprise.

As Rakic alluded to, Adesanya versus Blachowicz is a much bigger fight, and it could set the table for more, massive bouts in 2021 if ‘The Last Stylebender’ wins.

That said, it will be interesting to see how Adesanya does against Blachowicz, who isn’t short on power. The champ is also a considerable threat on the ground.

As far as Rakic fighting for the belt: he’ll need to get through Santos first, which likely won’t be easy. If he wins that bout, he’ll likely remain behind Teixeira in terms of the title shot race.

Another fighter to keep an eye on in the title shot mix is Jiri Prochazka. The former RIZIN champ is set to fight Dominick Reyes on February 27th, and if he wins that fight, he’ll also be knocking on the title shot door.

Ottman Azaitar Cut by UFC Due to COVID-19 Protocol Violation