WWE Hall Of Famer Pat Patterson passed away today at 79 years old. Reactions are pouring in for the first Intercontinental Champion.

Sadly, Pat Patterson passed away earlier in the day and the wrestling world is in shock.

2020 has been a tough year and that pattern continues. We are saddened to learn that Pat Patterson has passed away at the age of 79.

The news just broke and there are not many details available. But, the WWE Hall of Famer had been recently battling cancer.

Tony Marinaro commented how Patterson passed away earlier today at a Miami hospital.

The first Intercontinental Champion had a lengthy run in WWE, serving as one of Vince McMahon’s most trusted employees. Also, he created the Royal Rumble and is the first openly gay wrestler.

From everyone at Wrestle Newz, we send our thoughts to the friends and family of Patterson. 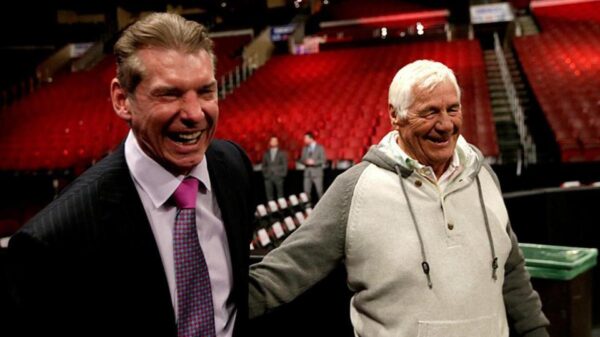 Below is WWE’s official announcement.

WWE is saddened to learn that Pat Patterson has passed away at the age of 79.

A true trailblazer of the industry, Patterson was linked to many “firsts” in sports-entertainment throughout his storied career, including the first-ever Intercontinental Title reign and the creation of the Royal Rumble Match. In a career spanning six decades, the renaissance man left an indelible mark on the industry in the ring, on the microphone and behind the scenes.

Patterson began his career in 1958 in his native Canada before becoming a fixture in the Bay Area for nearly two decades. After winning the AWA Tag Team Championship with Ray Stevens in 1978, Patterson moved on to WWE. Under the tutelage of The Grand Wizard, Patterson made an immediate impact and became the first Intercontinental Champion in September 1979. Patterson’s most legendary WWE rivalry was undoubtedly his war with Sgt. Slaughter, which captivated the WWE Universe with Boot Camp Matches and a brutal Alley Fight at Madison Square Garden.

Shortly before his in-ring retirement in 1984, Patterson joined Mr. McMahon as a color commentator. Even after hanging up his boots, Patterson was far from finished reimagining the possibilities of the sports-entertainment industry. In 1988, Patterson brought one of the ring’s most groundbreaking ideas to life by creating the original format for the Royal Rumble Match.

Patterson returned to the ring during WWE’s electric “Attitude Era,” creating many memorable moments alongside Gerald Brisco as one of Mr. McMahon’s hilarious “Stooges.” Patterson even pinned Crash Holly to claim the Hardcore Title. For all his efforts, Pat Patterson was inducted into the WWE Hall of Fame in 1996 by Bret Hart.

In his 25-plus years in WWE, Patterson was synonymous with making history. From the Intercontinental Title to the Royal Rumble Match and beyond, his name will forever be revered in WWE lore. This amazing legacy was captured in Patterson’s 2016 autobiography, Accepted: How the First Gay Superstar Changed WWE, a moving chronicle about his life both inside and out of the ring.

WWE extends its condolences to Patterson’s family and friends.

No words can describe what he gave to us. His body as an in-ring performer, his mind as a storyteller, and his spirit as a beloved member of our large @WWE family. I will miss him for so many reasons… it’s never goodbye, it’s see ya down the road. Love you, Pat. Abooze

I can not express how crushed I feel right now with the loss of Pat Patterson. A true member of my family, mentor and dear friend.
I love you Pat.
God speed. pic.twitter.com/FdaAFnsw8m

So sad to hear of the passing of @wwe legend Pat Patterson. One of the greatest minds in the business and just an all around great guy. I will miss him and his karaoke! RIP my friend. You are a hero to many! pic.twitter.com/WXFwJ1fjkO

Another example of how life is just too short. 💙💙💙 you don’t know the last time you will see someone. Take advantage of every second. https://t.co/JvsICjczSQ

I can’t believe it…

A Great Wrestler, He And Ray Were Second To None, A Fabulous Mind, Caring And Thoughtful, Always Had A Smile On His Face. Just To List A Few Of Many! The Last Thing I Can Remember Him Saying To Me Is “She Is So Damn Good Ricky, Are You Sure She Is Your Daughter?” RIP Pat! 🙏🏻 pic.twitter.com/KHzabO7v7G

#RIPPatPatterson I’m deeply grateful to have grown up with @wwe Hall of Famer, the first-ever Intercontinental Champion, the father of the #RoyalRumble and the first openly gay wrestler of his generation. Thank you for teaching me how to not take it all so seriously. Abooze ❤️