After Stephen Thompson [1] made sure Saturday he remains at the top of the UFC’s welterweight division, ‘Wonderboy’ called for a rematch with Jorge Masvidal. After his impressive win, the longtime contender outlined the thinking behind the callout. 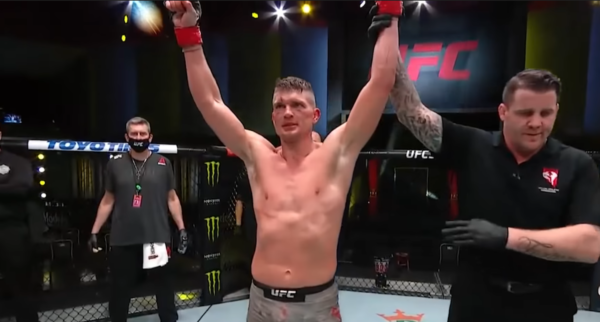 Thompson explains why he wants to run it back with Masvidal

The 37-year-old faced rising welterweight Geoff Neal at UFC Vegas 17 [2], and Thompson demonstrated in convincing fashion he remains a top-tier fighter. Thompson’s footwork, counter striking and hand speed ruled the day and then some, as he out struck Neal by a 191 to 110 margin [3].

Following his decision win, Thompson relayed he wants to fight Masvidal again, who he bested back in 2017 (via decision). While talking to the media afterward, ‘Wonderboy’ expanded on his thinking for the callout (quotes via MMA Fighting [4]).

“Well No. 1, I know he was interested if he had won the fight against [Kamaru] Usman the first time, he said he would want to defend [the title] against me,” Thompson said. “I know he wants that win back.

“It’s crazy because he inspires me to keep moving forward, to keep pushing because it wasn’t that long ago I beat him at UFC 217 and now he’s one of the most popular guys in the UFC.

Ranked higher than me. I thought we put on a good show the first time and why not do it again?”

It’s an interesting callout, and it’s true that Masvidal has said he wants to get that loss back. But, it would be surprising if this bout materialized next.

Due to the intense rivalry between Masvidal and Colby Covington, the consensus is that the UFC wants to make that bout. There’s no doubt it would be significantly bigger than Thompson – Masvidal 2.

If that fight doesn’t happen, you have to wonder if the UFC might look at Masvidal versus Nick Diaz. The latter is reportedly preparing for his return, and there’s a considerable backstory there, since Masvidal holds a win over Nick’s brother Nick.

All this talk about who Thompson might fight next, however, could be premature. Thompson incurred some sort of leg injury during his bout with Neal, as swelling and a lump appeared above his right knee later in the bout.

“Not sure yet. It could be a muscle tear here, which is balled up,” Thompson said. “If you saw me, I forgot which round it was, I was picking my knee up because I thought this was my kneecap, the bulge on my leg.

“But I think it’s muscle that’s balled up. Staying positive. Hopefully it’s not that bad.”

Yes, here’s hoping it’s nothing to serious that requires extensive surgery and Thompson will be able to fight again, fairly soon.