It remains to be seen what will unfold in 2021, on account of the COVID-19 pandemic. But, Bellator President Scott Coker [1] is hoping that circumstances will allow for the promotion to hold a huge card, in Moscow, for Fedor Emelianenko’s [2] last bout. 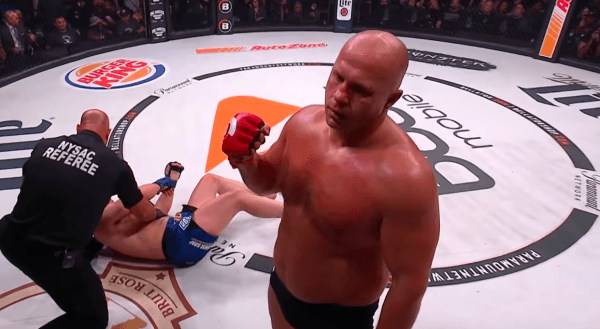 Coker hopes to have Fedor fight in front of 30,000 fans

The 44-year-old Emelianenko did not fight this past year. Due to the pandemic, Fedor hasn’t fought since last December, when he quickly put away ‘Rampage’ Jackson.

‘The Last Emperor’ has two fights left on his Bellator deal, and the consensus is that the Russian star will likely retire after he completed the deal. As a result, Coker has some big plans for Fedor’s final fight.

While talking to MMA Junkie [3] recently, Coker said this.

“I really wanted Fedor to fight his retirement fight not in front of just the officials and have the staff and be on a closed environment in a bubble,” Coker said.

“I really want Fedor to finish his career in front of 30,000 people in Moscow, to be honest, Bellator MMA’s first fight in Russia.

Do a fight in Moscow. For him, the prodigal son has returned. Fedor is the greatest fighter of all-time, and he’s now coming home to retire and put his gloves up and hang it up to retire.”

“I’m hoping that the vaccine will start fixing the situation and we can start bringing in crowds,” Coker added.

“But to me, I feel we’ve waited so long for Fedor to fight, hoping that the pandemic would thin out, and now that it’s getting close and I can see light at the end of the tunnel for the pandemic to go away, I really want to wait and to do these fights in a proper stadium, especially the one we do in Moscow.

I want to do something very big for him, because to me, it’s like he’s the king, and the king is returning from the battlefield.”

And while expanding on his hopes for the event, Coker also said this.

“Not only would he fight, but all the guys that we have, like (light heavyweight champion Vadim) Nemkov and like (Anatoly) Tokov and all those great fighters from Moscow that are fighting for Bellator, they will also fight on the card, and we’ll do maybe a ‘Russia vs. the world’ match there and you’ll see some fighters from Europe,” Coker said.

“We’ll have a great event.”

So, provided the vaccines work and the COVID-19 pandemic gets under control, obviously, Bellator would be able to hold a big event in Moscow.

That would likely mean Fedor competes late spring or early summer, and then one more time. If the plan is to finish out his Bellator deal this year.