Mark Hunt was pretty, pretty fired up at the weigh-ins for his upcoming boxing match with retired rugby player, Paul Gallen.

Legendary striker Mark Hunt is returning to the ring this weekend, and as you can see by watching the video below, tensions were running way hight at the weigh-ins. 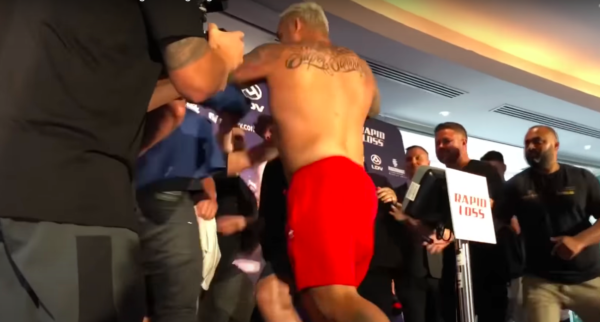 The 46-year-old Hunt hasn’t fought now since December, 2018, when he closed out his UFC run with a decision loss to Justin Willis.

On December 16th, Hunt is set to battle Paul Gallen, who is a retired rugby player that has gone 9-0-1 to date in boxing. Only three of those opponents, however, were reportedly established combat sports athletes.

Hunt apparently hasn’t cared for some of the comments Gallen has made leading up to the fight. You can check out the weigh-ins scuffle below.

Yo they’re just about to punch on at the weigh ins pic.twitter.com/j4taZmFxGH

The fireworks at the weigh-ins were likely the result of the exchanges the two had at the pre-fight presser. Here’s some of what they had to say (quotes via FOX Sports Australia).

Gallen: “He should have stayed in retirement. He won’t come out of it after this.”

After Gallen said that, the following back-and-forth went down.

Hunt: “This ain’t footy, this is fighting. I don’t know where he gets his ideas, especially with the money side. He’s talking sh*t again.”

Gallen: “Mate, you’re the one that’s getting all the money. You should be thanking me.”

Hunt: “You should be thanking me.”

Gallen: “How else would you be getting a payday right now if it wasn’t for me? how else? I had two or three other options.

Hunt: “I was talking to other people … overseas.”

If you’re wondering, Hunt has gone 0-1-1 in boxing matches to date. But, the feared striker went 30-13 in pro-kickboxing, and 13-14-1 in MMA, while consistently fighting top tier fighters.