Jose Aldo Says He’s in The “Restart” of His Career

Although Jose Aldo has lost both of his fights at bantamweight, the legend says he's feeling no pressure as he heads into UFC Vegas 17.

Due to the fact Jose Aldo has lost three straight, and has dropped both of his bouts at bantamweight to date, one could argue he’s in a must-win situation against Marlon Vera. But, as the former featherweight champ and legendary fighter gets set to compete at UFC Vegas 17, it doesn’t sound like Aldo’s feeling the pressure. 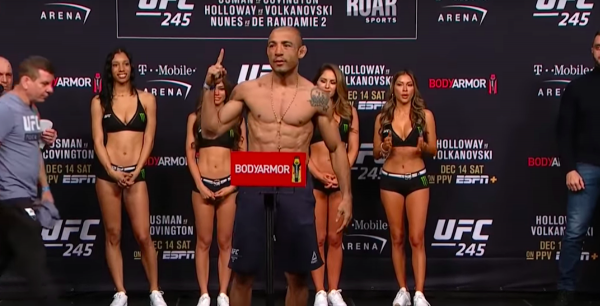 The 34-year-old Aldo is about to fight in his third bout at 135 pounds. The Brazilian star made the decision to drop to bantamweight in 2019, after he lost to featherweight champ, Alexander Volkanovski.

Aldo dropped a close split decision to Marlon Moraes in his first bantamweight fight. Since many people thought he won the bout, however, he was booked to face the current bantamweight king, Petr Yan.

The new champ stopped Aldo in this fifth round this past July.

So, on account of Aldo’s losing streak, and his age, his fight with Vera is a pivotal one. But, while talking to the media recently about tomorrow’s bout, he said this (quotes via MMA Junkie).

I’m not feeling any pressure because I always fight with great fighters.

I just keep training hard and get ready for my next opponent. I’m not feeling any pressure.”

“What keeps me motivated is the victory,” Aldo said. “I’m training hard because I want to be a champion at my new division. That’s my motivation every day.”

“I will always keep my career step by step,” Aldo said. “Right now I just think about Marlon Vera, but after Marlon Vera I can think about the future.”

What does the future hold?

Given all the massive fights Aldo has fought to date, it very well could be he’s not feeling any significant pressure heading into tomorrow. If Aldo wins, he will take a big step back towards the title shot mix.

After all, Vera has won four of his last five fights and he’s coming off a win over rising star, Sean O’Malley.

But…if Aldo loses to Vera, and loses badly, it will be interesting to see what Dana White says about the legend’s future.

On account of Aldo’s legendary status, it’s hard to imagine the UFC cutting him. After all, two of his last three defeats came against champions.

But, it wouldn’t be surprising if the UFC starts thinking about an exit strategy for Aldo.

All that aside, Aldo – Vera has must-see written all over it.