Due to the impressive year Deiveson Figueiredo [1] has had, there’s been plenty of talk lately, about whether the UFC could have a new star at flyweight.

Well, although Demetrious Johnson [2] agrees that ‘The God of War’ is a “good athlete”, he’s not sold on all the hype tied to Figueiredo yet. 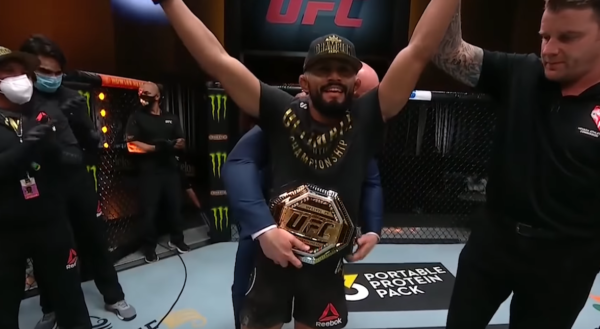 Figueiredo is set to defend his flyweight title against Brandon Moreno today at UFC 256. If the Brazilian champ scores an impressive win, many observers have opined he could be fighter of the year.

After all, 2020 has seen Figueiredo finish Joseph Benavidez on two occasions, who is one of the greatest flyweights of this generation. Then, at UFC 255 last month, Figueiredo quickly submitted Alex Perez/

So, due to this, and the fact Figueiredo has stopped 17 opponents out of the 21 he’s faced, there’s extensive buzz surrounding the champ. Recently the former UFC flyweight champ Johnson was asked for his thoughts on the rising star, and he said this (quotes via MMA Junkie [3]).

“Only time will tell if the hype is real,” Johnson said of Figueiredo. “Do I think he’s a good athlete? 1,000 percent.

But I need to see him fight more different styles and different athletes and the caliber of different guys.

Then that’s when he’ll live up to the hype. A guy like Jon Jones, he’s beat (expletive) everybody, even on cocaine and testing positive and whatever. He still beat you.”

“Alex Perez got caught in that choke, he just stood up. He should’ve hand fight, do the correct things to get out of it.

That’s the thing: Only time will tell. Only time’s going to tell.

When I fought Joseph Benavidez the first time, I beat him up. Then we fought the second time and I knocked him out.”

In addition, Johnson also had this to say about the dangerous champ.

“Deiveson Figueiredo is a great athlete, he hits hard, has a good chin and he’s well rounded.

People who usually hit hard can’t really grapple, but he can do it all.”

So, if we’re talking about whether we’re entering the ‘Figueiredo Era’, Johnson makes a good point.

There’s no question that Figueiredo has demonstrated he’s ridiculously dangerous. But, his reign as the champ has just begun, and he’s not that long removed from a decision loss to Jussier Formiga (although, it’s worth noting that is his only defeat to date).

If Figueiredo can become the first fighter to finish Moreno today, the hype will understandably, continue to build.