Cormier: UFC Will Need to Appeal to Khabib’s “Spirit” to Get Him Back

If Dana White wants to convince Khabib Nurmagomedov to fight again, Daniel Cormier says it's going to take a lot more than money.

UFC President Dana White is planning to meet with Khabib Nurmagomedov next month in Abu Dhabi, and it’s expected he’ll pull out all the stops, in an effort to get the champ back in the cage. But, if that plan only involves tabling a truckload of money for Khabib, it sounds like Daniel Cormier believes White will come up short. 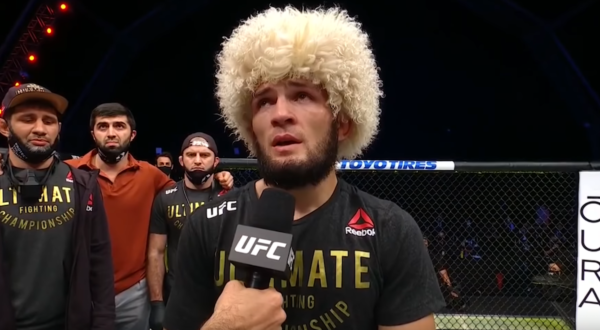 Cormier says the UFC needs to appeal to Khabib’s “spirit”

Ever since Khabib shocked the MMA world in October, by announcing he’s retiring, there’s been no shortage of debate as to whether he will fight again.

Some, like White, believe that Khabib could decide he wants to pursue the 30-0 mark, and return to the UFC. A key reason being that his father, Abdulmanap, thought that record would be a good time for his son to retire.

Others, however, don’t see Khabib changing his mind. The argument being that he promised his mother he would retire after UFC 254, following the death of his father earlier this year.

Well, recently Cormier spoke with Laura Sanko, and while talking about Khabib’s retirement he said this (quotes via MMA Junkie).

“I asked Khabib once, I said how much money would it take for me to be rich in Dagestan?” Cormier said.

“He said $5 million, and you’re rich for the rest of your life. Khabib has much more than $5 million, so I don’t know how much the money is gonna be the thing that draws him back into the octagon.

“Dana’s going to have to tap into something within his spirit to try to get him to fight again. …

He makes so much money outside of the octagon at this point, that it would have to be something that would drive him competitively to come back and fight, because I don’t think it’s gonna be money that makes him go back to the O ctagon.”

Given that Cormier is a longtime friend and teammate of Khabib, his insights here are probably spot on.

Khabib has said before that money is not a primary motivator for him. Case in point, he repeatedly said shot down the idea of fighting Conor McGregor again, just because it would make him a ton of cash.

Before Khabib retired, he talked about building on his legacy and noted that defeating opponents for a second time, wouldn’t do that.

So, if White does hope to get Khabib back in the Octagon, it will likely take a very special fight to do so. Could a fight with Georges St-Pierre do it?