Ilima-Lei Macfarlane [1]is no longer Bellator’s flyweight champion, and her impressive, undefeated run has come to an end. But, the Hawaiian star is putting a positive spin on what went down at Bellator 254 [2]. 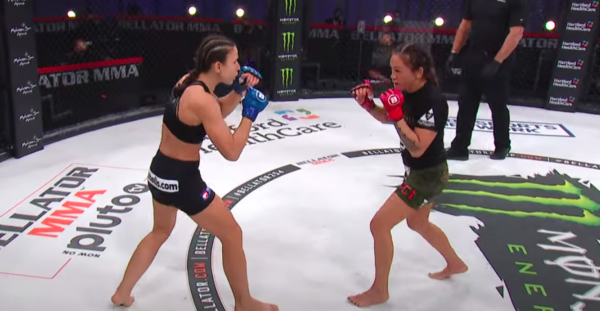 Macfarlane on why she’s actually “happy”

Heading into Bellator 254, the consensus was that Juliana Velasquez would pose a serious threat to Macfarlane’s run. Although Macfarlane (11-1) kept battling, and it was from a blowout, Velasquez (11-0) outscored her to win the belt.

Macfarlane had defended the flyweight crown four times before facing the undefeated fighter. Following the defeat, the 30-year-old had this to say about the loss (quote via MMA Junkie [3]).

“Honestly, this is, in a really weird way – this is kind of what I always felt like I needed in my career,” Macfarlane said.

“You can’t just always keep winning and excelling. You have to hit some type of plateau or something.

I’m actually really happy that this happened. I’m relieved that this is what it feels like to lose.”

And in addition, the vaunted grappler said this.

“These are tears of relief,” Macfarlane said. “It’s hard being a champion. It is hard doing it for so long, so I’m really grateful for this experience and this moment. …

Sometimes, I think as a champion you don’t get that luxury of choosing your fights or, I don’t know, taking really crazy fights.

I’ve always wanted to be that fighter that takes a fight on two weeks’ notice, you know? I guess you almost really do have more freedom when you’re not at the top.

“I’m excited for this next chapter. I was joking with my corner (like), ‘Yay, this means I don’t have to train for five rounds anymore in camp.

I can have a three-round camp. ‘Then I was like, ‘Oh, well, there might be a rematch or maybe we’ll get a tournament,’ so I guess I’ll still have to train for five rounds.

Yeah, it just seems like there’s a little bit more flexibility when you’re not the champ.’”

Macfarlane isn’t the only person who has made comments like after incurring their first defeat and losing the belt. It will be interesting to see whether she can rebound from this loss and reclaim the title.

Here are the complete results for Thursday’s card, which took place in Uncasville, Connecticut (results via MMA Junkie [4]).