WWE releases Zelina Vega and fans are now chiming in. Many came to her defense, believing company's policies were a factor in the departure.

Be careful what you say in WWE and Zelina Vega might have learned that the hard way as she was released. Currently, there are rumors that her release involved talk of unionizing talent and issues with WWE’s third party ban.

In a surprising move, WWE has released Zelina Vega. They confirmed the news with the following generic tweet.

WWE has come to terms on the release of Zelina Vega. We wish her all the best in her future endeavors.https://t.co/RUebMGwBTA

As of now, there is no reason for her release, but there is speculation. Two running theories involve her comments about unionizing and not wanting to leave third party platforms.

Less than an hour of her release being known, Vega tweeted in support of a union in WWE. Basically, WWE does want their talent unionizing, but that may change with a new US administration.

As for the third party issue, WWE told main roster talent they must leave. This angered many, including Paige who threatened to leave and also spoke about unionizing.

Currently, Vega noted how she will see fans on Twitch. Therefore, it sounds like we might hear side of the story relatively soon. 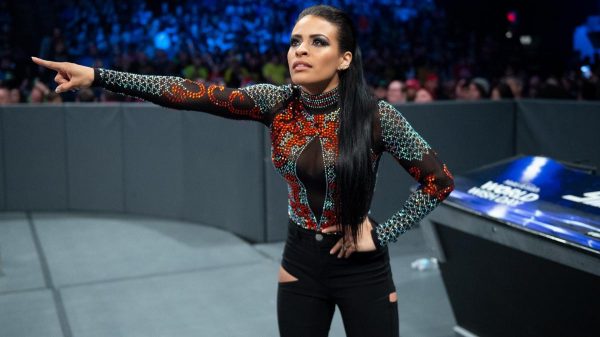 Before joining WWE, Vega worked for Impact Wrestling. Eventually, she signed with WWE and was assigned to NXT.

There, she was partnered with Andrade. She help him capture the NXT Championship before both were sent to the main roster.

While part of RAW and SmackDown, Vega managed Andrade and Angel Garza. Lately, she had been working as a singles wrestler and was chasing the Women’s Championship on both brands.

Stay tuned for further developments as the story still has many questions that need answers. Now, there is even speculation that her husband, and WWE wrestler Aleister Black, may also depart with the company.

They will release Zelina Vega but won’t release Velveteen Dream. Just think about that.

Zelina Vega let go for supporting unionization tells me Vince wants to pick a very interesting fight. We’ll see if he gets his wish.

Many WWE superstars have said to me on and off the record what a talent Zelina Vega is. Many consider her one of the very best talkers in the company, male and female.

Literally everyone else should be scrambling to pick her up.

Zelina Vega wanted to keep her Only Fans and Twitch income.

WWE said no. She stood up and took the bullet.

Zelina Vega tweets that she supports unionization at 5:46 p.m.

Zelina Vega getting released just for some bs

Me when WWE releases Zelina Vega but keeps Velveteen Dream, Austin Theory, Lars Sullivan, Riddle and tons of others pic.twitter.com/LNEF3SYcFo

Vince after he saw Zelina Vega is pro union pic.twitter.com/8F8gDg9JyQ

And here we go…

(Someone should try and hire her ASAP. Zelina Vega is really good!) https://t.co/ZaWWmwULnk