To the surprise of some, the presidents and or CEOs of several, big stage promotions have said they won’t be tabling any offers to Anderson Silva [1]. But, recently RIZIN FF founder and President Nobuyuki Sakakibara shared out a statement, in which he reported he’s interested in acquiring the legend’s services. 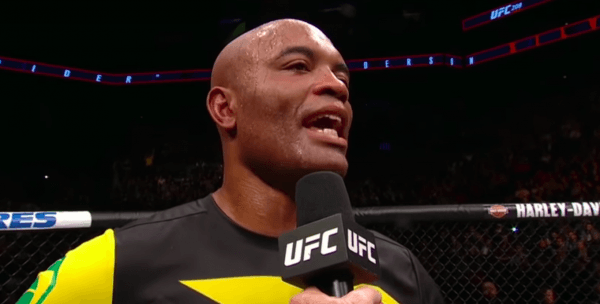 Sakakibara is interested in having Silva close out career in Japan

Recently it was confirmed that the UFC has released the 45-year-old Silva from his contract, which had one fight remaining on it. After it was announced that Silva was going to fight Uriah Hall on October 31st, initially, the fight was billed as the former middleweight champ’s last.

But, as the fight date neared, Silva only said the fight would be his last with the UFC and didn’t commit to retiring. Following his loss to Hall, UFC President Dana White argued that the legend should never fight again.

Silva, however, has announced he intends to keep fighting.

Well, although Silva is one of the greatest fighters ever, it was looking like the star might have trouble finding fights with a big stage promotion. Bellator’s Scott Coker, ONE Championship’s Chatri Sityodtong and the PFL’s Ray Sefo, all said they’re not interested [2] in signing the legend at this juncture.

But, in a statement Sakakibara sent out to outlets, the RIZIN President said this (statement via MMA Mania [3]).

“I have great memories with Anderson Silva during the PRIDE days and in my personal opinion, I think his career took off in Japan.

I have heard that Japan has a special part in his heart as well. I do feel that I would like to help him fulfill his wishes out of respect for what he has accomplished and what he has done for our sport.

I haven’t talked to him yet but I would be interested to see if we can come up with something that makes sense for him to start his final chapter in Japan.”

So, it will be interesting to see if anything comes of this. But, if Silva is indeed, really determined to keep fighting, then a move to RIZIN seems like a possibility.

RIZIN is Japan’s biggest promotion, and it has had combat sports stars like Floyd Mayweather Jr. and Fedor Emelianenko compete under its banner.

The organization is primarily focused on the Japanese market. So, if Silva does sign with RIZIN, it would mean his fans in South and North America will have some late nights or really early mornings, watching him fight.