As Rafael dos Anjos gets set to make his return to lightweight, the former champ has his sights set on finally fighting Conor McGregor.

Rafael dos Anjos has some work to do before first, but the former lightweight champ has made it clear he’s hoping to finally cross paths with Conor McGregor in the coming months. 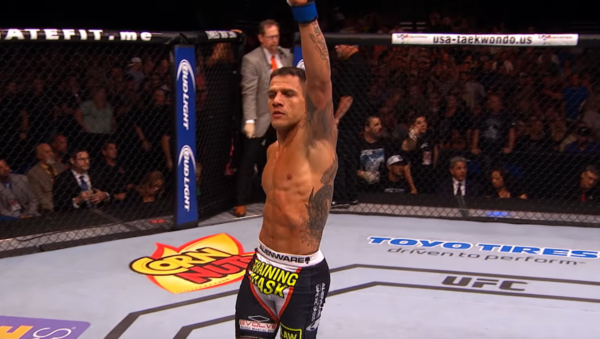 RDA says bout with McGregor is “the fight to make”

If you’re a big MMA fan you likely know that dos Anjos is set to battle Paul Felder this Saturday at UFC Vegas 14. Dos Anjos was originally booked to fight Islam Makhachev at the event, but the latter was recently forced out due to injury, and Felder stepped up.

Saturday’s bout will mark the first time since 2016 that dos Anjos has competed at lightweight. After he was defeated by Tony Ferguson that year, RDA moved up to welterweight.

Well, after winning his first three bouts at 170, RDA has dropped four of his last five. As a result, the 36-year-old has decided to change things up.

While talking to MMA Fighting recently about his return to 155, dos Anjos said this.

“It’s a matter of trying to reinvent myself,” dos Anjos said. “I moved up to welterweight, I had a good run.

I got really close to being double champ. I beat top guys in the welterweight division. I had a good run.

I fought for the title, but unfortunately, I lost, and then I lost again and I lost to [Kamaru] Usman and to Leon [Edwards] and the last one to [Michael] Chiesa.

Sometimes you have to step out of your comfort zone.”

And while talking about his plans for the lightweight division, RDA relayed the following.

“This is a new beginning at lightweight. I’m going after the title. Khabib [Nurmagomedov] left and the division is wide open.”

The only champions in that division was me and Conor [McGregor], and I think that’s the fight to make.

“I think the division is wide open, so why not? I want that fight.”

Now, you may remember that dos Anjos was booked to fight McGregor back in 2016. But, a broken foot pulled RDA from the bout and McGregor went on to fight Nate Diaz instead.

Dos Anjos ended up losing the lightweight title to Eddie Alvarez in July, 2016, and his path with McGregor further diverged.

So, could we see these two finally throw hands? Say, sometime in late 2021? It’s possible?

But a lot would have to fall into place.

First things first, RDA needs to get by Felder and then he’ll likely need to defeat one or two top contenders before he’s in the title shot mix.

McGregor also needs to return to action – it looks like he’ll probably fight Dustin Poirier next – and if he wins that, he very likely will be booked for a title fight.

But, if McGregor reclaims the lightweight title, does he plan to defend that belt against the top contender moving forward?

Rather than moving up to 170 or taking other super fights? That seems somewhat unlikely.