Chris Jericho has no problem speaking his mind and he even criticizes AEW. And, the Hulk Hogan Biopic is not yet guaranteed.

Chris Jericho knows what he is talking about and that includes the times “Demo God” criticizes AEW. Also, the Hulk Hogan biopic is technically not in development.

When AEW formed, the biggest name they brought in was Chris Jericho. Over a year later and he remains one of the best decisions AEW made.

Unlike in WWE, there is more freedom in AEW and that includes speaking your mind. Jericho has done so in the past and recently did the same.

“Everything isn’t always good,” Jericho said on Speaking on Keeping it 100 with Konnan. “We have a lot of details slip through the cracks. We still have quite a few times when very similar angles happen right after one another.”

In particular, Jericho mentioned a segment from a few weeks back. The segment involved MJF and the Inner Circle.

MJF was trying to join the the stable and the question posed was if they would allow it. Then, the next segment featured Taz asking Will Hobbs if he wanted to join his team.

The similarities was not the big issue, but the placement was. Basically, Jericho told AEW’s production team to watch how they place segments and avoid similar words.

“And I went to the production team and I was like, ‘Guys, how can that happen? How can that even be?’ Like, it’s the exact same thing, and nobody even noticed that,” said Jericho.

“Maybe we should move that package somewhere else. In the future, let’s not use to word ‘join’ for Will and Taz.”

“And that’s just common sense, but sometimes those things just fall through the cracks. I’d like to see a little bit more attention to those kind of details.”

Jericho is full of wisdom and he makes a good point about similar angles. 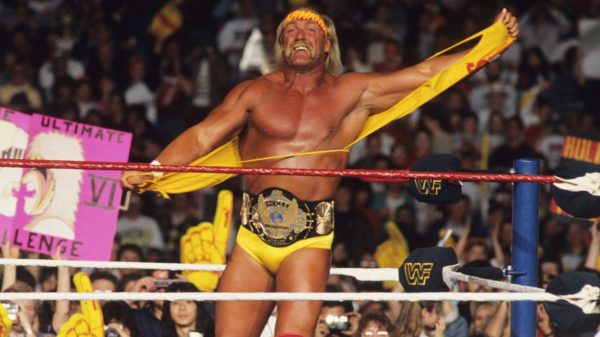 Netflix is preparing for an upcoming biopic on Hulk Hogan and it has gotten plenty of attention. The feature will see Chris Hensworth portray Hogan.

While Hensworth has been getting in the physical shape to match the 24 inch pythons, the biopic is not a done deal. Eric Bischoff, who is the executive producer, still has high hopes Netflix will produce the project.

But, he noted how production has not started. Also, he thinks with the biopic landing some big names it is only a matter of time.

“The project is still technically in development, meaning it’s not scheduled for production,” said Bischoff on 83 Weeks With Christy Olson. “There’s no casting going on.”

“There’s no scheduling going on. It’s still in, I would say, the late stages of development.”

“So it’s not a done deal by any stretch of the imagination. I wish it was, because I’d be out looking for a new truck. But it’s not.”

“The bulk of my involvement honestly was in the early, early, early phases. All my heavy lifting has already been done.”

Other names set to star are Todd Phillips and Scott Silver. Hogan helped define modern pro wrestling and his story needs to be told.

Chris Hemsworth will be playing Hulk Hogan and he definitely is starting to pack on muscle. That’s dedication right there pic.twitter.com/XWmgqCJ4r3

That includes the highs of being the biggest star around and the lows too.