UFC 255 didn’t go the way Alex Perez [1] hoped. But, it sounds like the the flyweight contender is keeping his head up, following is quick loss to the champ, Deiveson Figueiredo [2]. 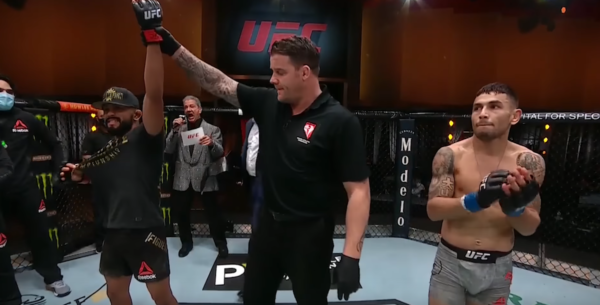 Perez vows he’ll be back

The 28-year-old Perez was moved into Saturday’s title fight, after Figueiredo’s original opponent, Cody Garbrandt, withdrew due to injury. Perez threatened with a takedown attempt early on into the fight, but the champ eventually scrambled into a fight ending, guillotine choke.

Following the loss, Perez shared out this statement via Instagram.

Well, it is what it is. It’s part of the business. Stuff happens.

I’ll be back. 2020 has been a crazy year for me. 3 fights and finding out I’ll be a dad. I’m beyond blessed. Thank you for all the support I’ll be back!

Thank you to all my teammates coach, family, friends and sponsors for all the support. Without you guys,I wouldn’t be here. #itiswhatitis

It will be interesting to see how and if Perez bounces back from this defeat. But, when you consider Perez has gone 6-2 to date in the UFC, there’s certainly reasons to believe he’ll emain in the title shot mix.

His only other loss in the UFC came against Joseph Benavidez, who is one of the greatest flyweights in UFC history. Perez also holds a win over Jussier Formiga, who is the only person to beat Figueiredo to date.