White Says he Will Try For Nurmagomedov – Ferguson Again, if Need Be

It sounds like the UFC will go down the Khabib Nurmagomedov - Tony Ferguson road once again, for a sixth time...if the promotion needs to.

After the fifth booking for a Khabib Nurmagomedov – Tony Ferguson fight fell through earlier this year, a lot of folks turned the page on the all-star fight ever happening. But, despite all the issues that have hit that match-up over the years, it looks like the UFC would book it again… if that’s how the cards fall. 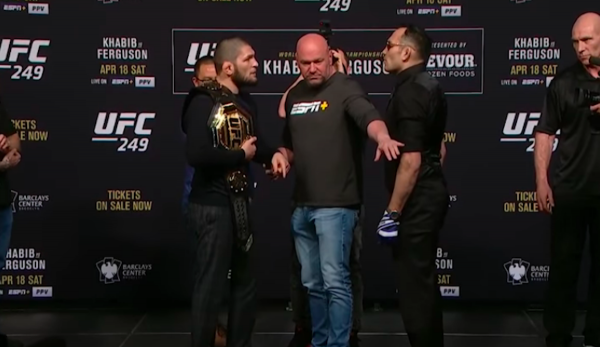 If you’re a big/longtime fan, you know that Ferguson was supposed to fight Nurmagomedov earlier this year at UFC 249. That marked the fifth time the two had been booked to battle.

Every time the UFC had scheduled Khabib and Tony to fight before, health issues or injuries had punted the match-up.

In this latest case, however, what canceled the bout was nothing to do with the stars themselves. Due to the coronavirus pandemic, Khabib was stranded in Russia and was unable to leave to attend UFC 249.

But, despite that, talk of the fight being cursed continued to make the rounds. Ultimately, Ferguson ended up facing Justin Gaethje, and lost via TKO stoppage.

Well, as it stands today, Khabib is set to fight Gaethje on October 24th. But, if he wins that fight, it’s not completely clear who the lightweight champ will fight next.

Dana White recently talked with Sports Illustrated, and when he was asked about the possibility of Khabib and “El Cucuy” fighting down the line, he said this.

“If Khabib does beat Gaethe, you get Tony Ferguson another fight, which we’re working on right now. And hopefully that fight with Khabib happens because I know people want to see it.

I don’t think I’ve ever seen a fight fall apart as many times as those two. It almost scares me to make the fight again.

What’s going to happen? An asteroid comes to earth? That’s the level of bad this thing is.”

So,  a couple of key things have to fall into place before booking Khabib – Ferguson for a sixth time is even possible. Nurmagomedov needs to beat Gaethje, and Ferguson will need to return to the win column, and one would think he’ll be tapped to face a top contender.

But, given how dominant Gaethje’s win over Ferguson was, “El Cucuy” will likely need to have an impressive outing in order for him to receive a title shot.

There’s also the issue of whether Nurmagomedov is looking at retiring after his 30th bout, and whether Georges St-Pierre could indeed, decide to return for a showdown with the champ.

In other words, even if Ferguson wins his next bout, if the UFC does manage to book Khabib – GSP, we may never see Nurmagomedov and “El Cucuy” throw down.