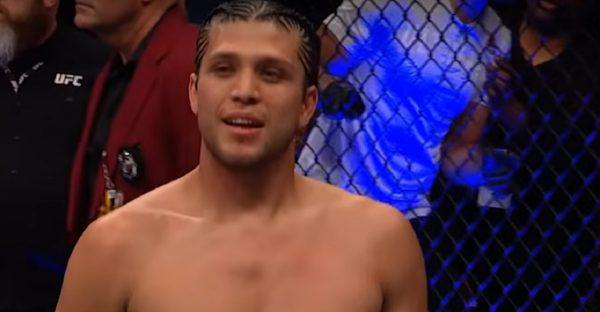 Jung came out with a combo and Ortega countered with a hard leg kick. Neither man threw much after that for a minute or so. Both men fired in a couple of leg kicks, but they continued to be fairly cautious. Ortega started picking up the pace and scored with a nice hook. Moments later, Ortega planted another hook that sent an off balance Jung momentarily to the floor. Ortega followed up with a few kicks before the round ended.

Jung came out pressuring again in round two and fired in some heavy punches. Ortega  changed levels a couple of minutes in but Jung defended the TD. Later in the round, Jung planted a hard uppercut that Ortega ate. Both men continued to be relatively cautious. In the final minute, Ortega sent Jung to the deck with a beautifully timed, spinning elbow. Wow. Jung got back to his feet but Ortega  took him down.

Jung continued to pressure in round three. Ortega fired in a hard kick to the body a couple of minutes in. Jung flurried in later in the frame but nothing landed. Ortega scored with a couple of leg kicks. Ortega  planted a nice straight left to the body. Late in the frame, Ortega changed levels but Jung defended the TD. Ortega landed a couple more shots before the round ended. Jung is likely down 3-0.

Jung picked up the pressuring to begin round four. Ortega tagged Jung with a nice overhand left and followed up with hard kick to the body. A couple of minutes in, Ortega drove in with a takedown and Jung incurred a cut. The ref stopped the fight to have the doctor look at the cut, which is above the left eye of Jung.

The fight resumed, but Ortega continued to land more often. Late in the round, Ortega changed levels again but was unable to score the TD

Jung is very likely down four rounds to begin the frame. Jung was still moving forward but Ortega continued to counter beautifully. A couple of minutes in, Jung was still pressuring but he was unable to land any telling strikes. Ortega continued to score with jabs and Jung’s cut was more apparent than ever. Jung picked up his attacks late in the fight, but Ortega bested him again. Impressive performance by ‘T-City’.

After 25 minutes, it was announced that all three judges scored every round for Ortega. The latter was fighting for the first time since 2018, when he lost via TKO to then featherweight champ, Max Holloway.

Here are the complete results for UFC Fight Island 6, which took place in Abu Dhabi.

UFC On ESPN Results: Calvin Kattar Kicks Off 2022 With Win