Following his pivotal loss to Brian Ortega on Saturday, Chan Sung Jung is reporting he has no memory of the fight after round two. 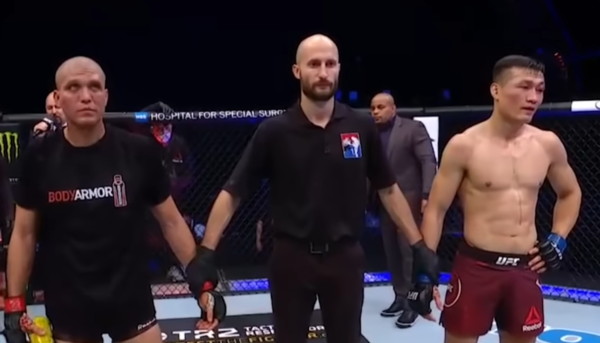 Jung took on Ortega in the headliner of UFC Fight Island 6, in a fight that was to determine who will face featherweight champ, Alexander Volkanovski next.

Ortega had a solid opening round, as he countered the pressure game of Jung effectively. ‘The Korean Zombie’ kept coming in the second frame, however, and he started to have more success landing shots. But, seemingly out of nowhere, Ortega tagged Jung with a booming, spinning elbow that sent him to the deck.

Well, although Jung recovered and continue to pressure for the remainder of the fight, Ortega continued to outscore him and cruised to a decision win.

Since then, the South Korean star posted the statement below, in which he reported he doesn’t remember rounds three, four and five (translation via MMA Mania).

“I have no memory of Rounds 3, 4, 5. It’s fascinating to watch myself fight during the rounds I can’t remember, haha.”

“When I lose a match, I have to analyze why I lost,” Jung continued. “Ortega fought in southpaw stance a lot and when facing southpaw, I was supposed to bait him in but I was a stupid idiot for getting caught by that elbow.

Ortega fought extremely well.. And right now, I’m just completely embarrassed / ashamed of myself. But I really want to thank you guys for rooting for me and I’m really sorry.”

Next move for ‘TKZ’

So, based off Jung’s statement, it certainly sounds like he was significantly hurt in round two. Credit to Ortega. His striking has never looked better and it will be interesting to see how he does against Volkanovski.

It will also be interesting to see how Jung recovers from this defeat and who he faces next. Although Jung is only 33 year’s old, for smaller fighters, that is starting to get up there.

So, in other words, if ‘TKZ’ intends to make another title run, he’ll likeley need to stay active and record some big wins in 2021.

Maybe a bout with the #5 ranked Calvin Kattar next makes sense? Or Max Holloway? If the former champ’ staying at 145 pounds?