UFC 254 is less than two weeks away, but if Tony Ferguson wants to fight Michael Chandler at the event, the latter says he's down.

The chances of this happening seem slim to none, but, if Tony Ferguson wants to fight Michael Chandler at UFC 254, the former Bellator champ’s on board. 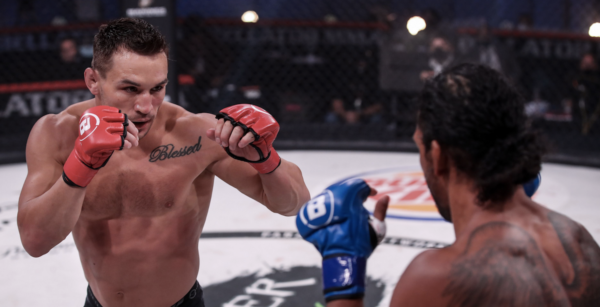 UFC 254 is taking place on October 24th and it will feature a highly anticipated bout between lightweight champ Khabib Nurmagomedov and interim champ, Justin Gaethje. Chandler, who recently signed with the UFC, is serving as an alternate for the card’s headliner.

Not long ago, the expectation was that Ferguson was also going to fight Dustin Poirier at the event. But, then it was reported contract negotiations for the bout failed.

Well, recently Chandler appeared on MMA Junkie.com Radio, and when asked if he would fight Ferguson at the event instead, the powerful wrestler said this (quote via MMA Junkie).

It’s already been talked about, so you don’t add any names to that hat whenever a guy in the top five is already talked about.”

And, while discussing his initial talks with the UFC, Chandler also reported this.

“When I was getting the deal done with the UFC, they essentially said, ‘We know that you just fought in August, but would you be willing to fight in October?’ and I said ‘absolutely.’” Chandler said. “They asked if I’d be willing to fight Dustin Poirier or Tony Ferguson in October and said those guys are scheduled to fight but they’re having money issues and they’re kind of having different issues and whatnot and I said ‘absolutely.’

They (UFC) said, ‘We kind of know the answer to this, but if one of those guys aren’t willing to fight, will you be the backup for the Oct. 24 card? I said ‘absolutely.’

“So my answer to all six of their questions was yes, yes, yes. When you come into an organization, you have to show your worth and I think that was a way to not throw my weight around.

Could Ferguson be next for Chandler? But not at UFC 254?

So, considering that UFC 254 is less than two weeks away, obviously, something extraordinary would need to happen before Ferguson – Chandler is tabled for the card. But, could we see these two fight in the near future?

Not long ago, Ferguson didn’t sound too keen on facing Chandler, given that he’s a newcomer to the UFC. In other words, Ferguson probably has more to lose than to gain, by facing the former Bellator champ.

That said, if the UFC offers “El Cucuy” a bump in pay then maybe he’ll get on board. Especially if Poirier ends up facing Conor McGregor again.

The other option for Ferguson could be Dan Hooker, who is ranked #5 in the division and is probably a more familiar name to casual fans.