Paulo Costa has made it clear he intends to avenge his loss to Israel Adesanya. But, the champ is advising his rival to "let it go".

Following his one-sided, loss to Israel Adesanya last month, Paulo Costa has promised he’ll be back, hunting for a rematch. But, according to the UFC’s middleweight champ, his rival needs to move on. 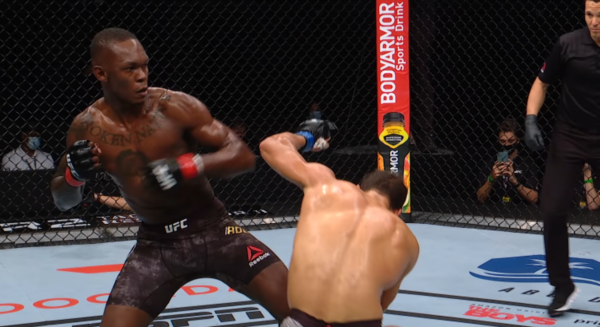 “The Last Stylebender” was booked to face Costa at UFC 253, after the two traded verbal jabs for months. Heading into the bout, the consensus seemed to be that while Adesanya would likely win, the powerful, rugged Costa would provide his toughest test to date.

Well, that didn’t happen, as Adesanya outscored Costa from the opening horn and finished him round two.

After the decisive defeat, Costa claimed he wasn’t 100% for the bout. He also vowed he would secure a rematch and make Adesanya pay for his controversial, post-fight celebration.

More recently, Adesanya spoke with MMA Fighting, and when asked if he sees a rematch with Costa down the line, the champ said this.

“I don’t think I ever see him again to be honest,” Adesanya said. “I think this is going to be like Conor McGregor and Jose Aldo. He has to let it go.”

Then Adesanya proceeded to reference the only KO loss he’s incurred in his awe-inspiring career. In 2017, while fighting for the kickboxing promotion GLORY, Adesanya was KO’d by the promotion’s middleweight champ, Alex Pereira.

“I’ve lost a fight. I’ve been knocked out before by one of his countrymen,” Adesanya said.

So who’s really winning? You know why? Cause I don’t chase that. I don’t need it back.

“I’m like it happened, it taught me a valuable lesson in staying true to myself and true to my craft and not listening to what anyone else said.

It taught me a really valuable lesson in that. So I’m grateful it happened but you don’t see me calling out the same guy.

And in addition, Adesanya said this about Costa.

“I’ve done it to him. I’ve embarrassed him. He just has to accept it and realize ‘my mouth wrote checks my ass couldn’t cash and Israel likes to collect.’

It happened and let it go. So that’s my advice to him cause that’s what I did.”

It will be interesting to see if Adesanya’s prediction here is correct. Due to the fact Costa lost so decisively, his road to a rematch won’t be a short one, provided Adesanya keeps winning.

But, when you consider Costa is only 29 and Adesanya is 31, there’s certainly time for these two to cross paths again, if “Borrachinha” goes on another run.

It’s also worth noting that Costa, like Adesanya, has talked about moving up to light heavyweight. So, you never know. Maybe a rematch will go down at 205?