The WWE loves entertainers and that is exactly what they get in Elias.

During the 2020 WWE Draft, Elias [1] made his triumphant return to the RAW brand. And according to reports, he is set to receive a major, major push over the next several weeks.

Inside The Ropes Wrestling [2] reports that “WWE management has immense confidence in Elias. As a performer to be able to fill any time allocation and deliver an entertaining performance.”

ITR also reports that Elias [8] will be a “staple of the red brand going forward – and one of the show’s top stars. There is also an extra hour each week for RAW with it being three hours long compared to two hours for SmackDown.

“Furthermore, we’re told that Elias being drafted to the red brand was a ‘no-brainer,'” the report states. “Both for the performer’s benefit and the benefit of the show.”

In 2018, an album titled WWE: Walk With Elias was released by the WWE Music Group featuring Sciullo.

Elias joined the main roster of WWE in 2017 on RAW, challenging for the Intercontinental championship against Roman Reigns. He also had a lengthy run in the Greatest Royal Rumble event.

During the 2019 WWE Superstar Shake-up, Elias went to SmackDown and formed an alliance with Shane McMahon.

This past May, a torn pectoral muscle left Elias off television. He has been out of action since the injury before returning during the WWE Draft on RAW.

He instantly went over Jeff Hardy, who he believes him hit with a car. Hopefully, fans learn shortly who was responsible for actually putting Elias on the shelf.

At the time, Sheamus and Sami Zayn were being discussed as possible culprits. Of course, the recent draft could mean WWE needs to change direction.

Elias and Jeff Hardy will meet at Hell In A Cell this weekend. 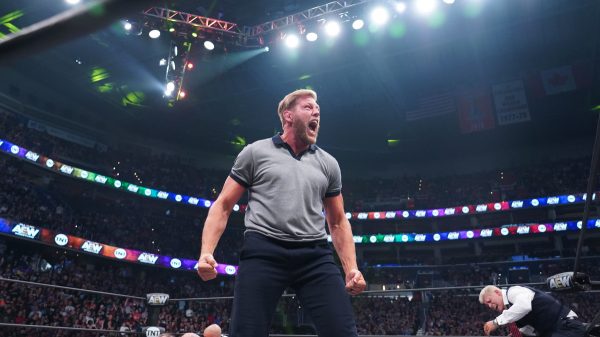 All Elite Wrestling superstar Jake Hager [9] returns to the cage later this month.

Hager will face Brandon Calton in a featured bout at Bellator 250 on October 29.

The former WWE superstar has split his focus in recent years on both pro wrestling and mixed martial arts. With AEW, Hager has been pairing up with Chris Jericho over the past several weeks for bouts.

The 38-year-old Hager is 2-0 in his MMA career, with both wins coming as part of the Bellator MMA roster. He has not been in action, though, since a 2019 no-contest vs. Anthony Garrett.

Hager’s bout with Garrett was stopped after multiple groin strikes. The illegal move was unintentional, resulting in a no-contest instead of a disqualification.

Carlton is also 2-0 in his career, having made his professional debut this past June. He scored a 14-second knockout in his first bout and won by second round TKO in his second.

Hager’s bout will be part of the CBSSports.com live stream preliminary card.