Anderson Silva and Uriah Hall are throwing down tonight, but Andre Fili says his bout with Bryce Mitchell is the "fight to watch".

Anderson Silva is set to battle Uriah Hall tonight at UFC Vegas 12, in a contest hardcore fans have speculated about for years. Not only that, the fight will likely mark the last time Silva will compete under the UFC banner.

But, despite the understandable buzz that’s tied to the headliner, Andre Fili believes his scrap with Bryce Mitchell will steal the show. 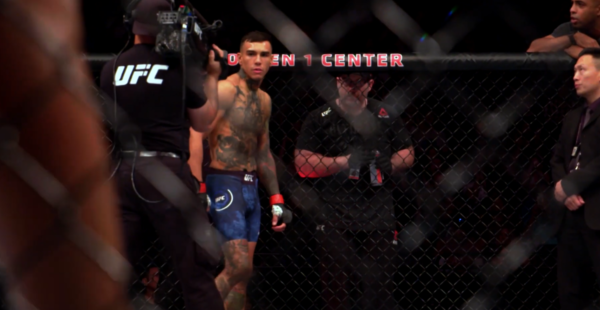 Fili proclaims “this is the fight to watch”

In recent months, there’s been speculation that Silva could hang up the gloves at UFC Vegas 12. While the legend has stopped short of saying that, he has said the bout will likely be his last with the UFC.

On account of Hall’s striking abilities, there’s been talk about how a bout with Silva might play out, ever since he was on TUF. But, the middleweights never ended up crossing paths until today.

Well, in the co-main event, Fili has been assigned the task of handing the rising featherweight Mitchell his first defeat. While talking to UFC.com recently, Fili made the following proclamation.

Him and I will steal the show. Anderson Silva is a legend and Uriah Hall is a buddy of mine; I’ve got a lot of love for both those dudes, but we’re going to steal the show.

Could Fili be right? From a purely entertainment perspective, he could be. After all, Mitchell is a terror on the ground and seemingly never keeps advancing, while Fili is a dynamic striker with underrated wrestling.

Further, while there are plenty of reasons to believe the Hall – Silva bout will feature plenty of memorable moments, the latter is now 45 and isn’t the powerhouse he once was.

That said, from a historic perspective, it’s completely understandable why much of the card’s focus has been on the headliner.

Fili’s ready for the next level

It will be interesting to see if Fili can halt Mitchell’s rise up the ranks. Although Fili has lost two of his last three bouts, those defeats came via decision to Michael Johnson and Sodiq Yusuff.

So, it’s understandable why Fili isn’t short on confidence heading into tonight’s bout.

“I’m fighting the best guys in the world. I’ve never been in a boring fight. Featherweight has always been one of the most exciting weight classes and I don’t think that’s ever going to change.

So when I get that definitive win, when I get that performance bonus win against my opponent, it’s going to put me right up in the talks of those big-money, title-contention fights.”

Fili (21-7) will be fighting for the first time since June when he recorded a split decision win over Charles Jourdain.

Mitchell (13-0), meanwhile, worked his way to a decision win over Charles Rosa in his last outing, which went down in May.