Ovince Saint Preux scored yet another, finish tonight at UFC Vegas 9 [1], as the dangerous light heavyweight scored a walk off knockout against Alonzo Menifield. 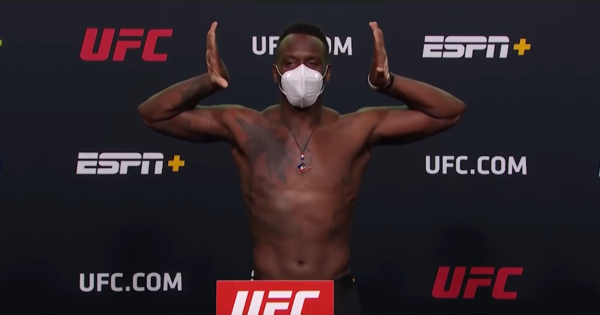 Menifield came out aggressively and winged a big hook. Moments later, Menifield threatened with a huge left. OSP looked to counter with lefts and some front kicks. Menifield pushed OSP to the cage briefly and not long after, the latter went to the body with more kicks. OSP scored with a nice left mid round.  Menifield planted a hard counter right late in the frame but OSP continued to be busier. Right before the round ended, Menifield tagged OSP with a hard left that wobbled him,

OSP continued to fire kicks in round two followed by left hands. OSP pressured and Menifield looked to counter. By mid round, OSP continued to be the much busier fighter, with a steady stream of kicks. Late in the round, OSP stuck a hard right hand and Menifield responded with some winging hooks. Moments later, OSP floored Menifield with a booming left and that was that. Wow. Walk off KO for Saint Preux.

Saint Preux (25-14) was fighting for the first time since he dropped a split decision loss to heavyweight Ben Rothwell in May.

Here are the results so far for UFC Vegas 9, which is taking place at the Apex Facility.