It remains to be seen if Nick Diaz fights again, but Tyron Woodley beleives the star already deserves a spot in the UFC's Hall of Fame.

As a lot of people continue to buzz about Nick Diaz possibly, returning to the Octagon, Tyron Woodley says the Stockton star should be in the UFC Hall of Fame. 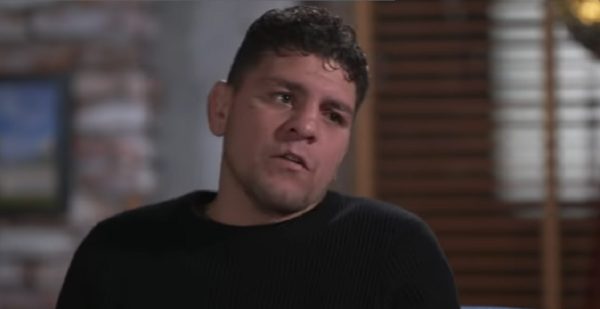 Ever since Diaz fought for the last time, way back in 2015, there’s been talk about when and if the eccentric fighter would compete again. More recently, speculation about Diaz’s return has spiked, as recently his manager reported the former Strikeforce champ is planning to fight in early 2021.

In addition, a video of a very slim Diaz was shared out, and his manager reported the fighter completed a test weight cut.

Well, due to all this, Woodley was recently asked to comment on the Diaz situation, ahead of his bout this Saturday with Colby Covington. The former welterweight champ relayed the following while talking to TMZ (quotes via MMA Fighting).

“If you want to fight, fight,” Woodley said, while talking about Diaz’s possible return. “We don’t need a big build up.

We don’t need a test weight cut. If you want to fight, fight. Sign a contract and get in the octagon.

It’s been so much talk about if he’s gonna fight. Even his brother, ‘Is he gonna come back?’

I think that they deserve the hype that they’ve gotten because when they were fighting years and years back, they weren’t getting paid hardly anything.

Go back and pull up the public records on what Nate Diaz made the fight right before Conor McGregor. They’re kind of embarrassing compared to what he ended up making in that fight and the second fight.

And then, while talking about a possible opponent for Diaz, Woodley opined that the outspoken fighter should be a Hall of Fame inductee.

“If he comes back to the sport, I think it will be good to have another household name back in the sport competing,” Woodley said.

“But if he doesn’t, he doesn’t. I think he’s done enough in his career, in my opinion, to be inducted into the Hall of Fame.”

“I think (he deserves it), because he was one of the original bad boys,” Woodley said. “There’s some people in the Hall of Fame that had never won a world title, whether it’s just a fight, there’s so many different categories of it.

But when you think about it, he came over from Strikeforce, he had a crazy reputation then, and I think you’ve got to take some of that into account when you’re thinking about a Hall of Fame inductee.

It’s an interesting idea from Woodley, and chances are some other people have voiced this opinion too.

On one hand, since Diaz hasn’t won a bout since 2011 and because he’s currently 1-2, with 1 no contest in his latest UFC run, some might argue he shouldn’t be in the HOF.

But, there’s no denying that Diaz was a serious draw for a long time, and he likely continues to be. He also won nine straight fights before returning to the UFC in 2011, and defended the Strikeforce welterweight title three times.

So, if a fighter’s UFC Hall of Fame induction is tied to records outside the promotion, and their general impact overall on the sport, you could make the case for Diaz.