Tyron Woodley made a memorable statement today at the UFC Vegas 11 pre-fight presser, by answering every question with "Black Lives Matter".

As Tyron Woodley gets set to face Colby Covington on Saturday, in a massive grudge match, the star is using the opportunity to promote the Black Lives Matter movement. 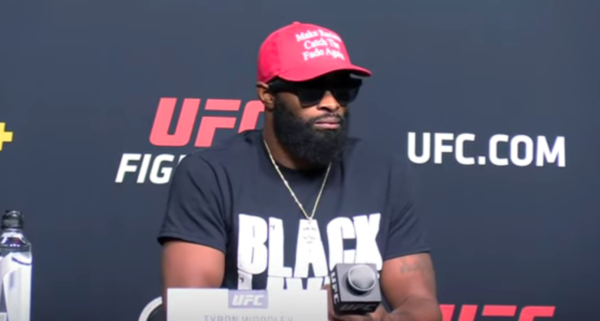 The former welterweight champ is finally booked to face Covington in the headliner of UFC Vegas 11, after the two have traded verbal shots for several years.

At today’s pre-fight press conference, however, Woodley opted to make the Black Lives Matter movement the focal point. Here’s how the heavy-handed fighter responded to each question (quotes via MMA Fighting).

“The fact that Black Lives Matter”.

The former champ talked about giving back

In an interview earlier this week with ESPN, Woodley had this to say about the Black Lives Matter movement and his support of it.

“I love what the NBA has done,” Woodley said. “You see Black Lives Matter on jerseys. You see it on the floor.

You see guys represent for the late and great Chadwick [Boseman]. You see people are speaking out, and that’s what it’s going to take.

We can’t just sit back. When these greats die, don’t let their death go in vain.

“I wish the UFC would do a little bit more; I’m really not happy with that,” Woodley said.

“I had a long conversation with Dana White about it when the riots happened at Ferguson. I wanted them to utilize me to show a positive spin.

“Let’s go give back. Let’s go do seminars with these kids. Mixed martial arts is an affordable martial art that they can do.

Start doing seminars, bring some of these guests in and have them talk to the kids about life and what martial arts and the discipline has given to them.”

Woodley (19-5) is coming off back-to-back decision losses to Gilburt Burns and Kamaru Usman, heading into UFC Vegas 11. Covington (15-2) has yet to compete since he was stopped by the champion Usman last December.

Saturday’s card will be hosted by the UFC’s Apex Facility.