Not long ago, UFC President Dana White scoffed at Scott Coker’s argument that Bellator has the best light heavyweight division in the business. Well, more recently, Coker’s fired back at White, and has said one of the latter’s claims was a lie. 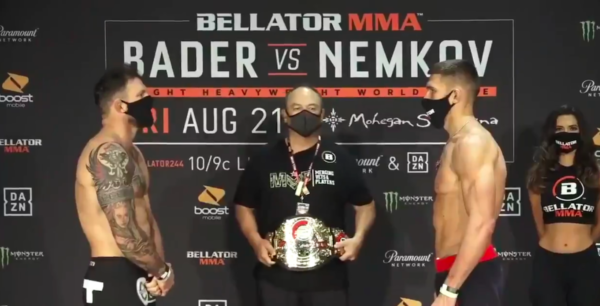 The exchange all started when leading up to the recent Bellator 244 card, Coker said the promotion has the top, light heavyweight division in MMA. After Vadim Nemkov ended Ryan Bader’s reign as the 205 champ, Coker didn’t back off that statement.

White was asked for his thoughts not long after, and the UFC boss man, not surprisingly, took issue with the claim (quote via MMA Junkie).

We let those guys all go. It’s like the (expletive) dumbest thing I’ve heard, but I get it. He’s got to (expletive) do his thing.

Well, prior to Bellator 245 on Friday, Coker was asked to respond to White’s comments (quotes via MMA Junkie).

“We do have the best 205-pound division on the planet, bar none,” Coker said. “When you think about the fighters that we have, tonight, Phil and Machida, then you have (Vadim) Nemkov.

I think Gegard (Mousasi) will eventually move up to 205 because he told me he wants to move up to 205. … That group has become a really healthy, robust division for us.

“Ryan Bader and Phil Davis, or anyone that’s come over from the UFC, they’ve come over in free agency. It’s not that they come over here just because they got kicked out.

That’s a lie. The truth is they were free agents and they wanted to shop their (worth) and we offered them a better deal so they came over here.

If can come here and you’re going to get a better deal, why wouldn’t you come to Bellator? If you have a better deal there, then stay there and do your thing. As far as being kicked out of certain organizations, that’s a lie.”

Does Coker have a point?

So, there’s a couple of things to look at here. First off, does Bellator have the best light heavyweight division?

You can have a debate about that.

The fact Jon Jones is moving up to heavyweight, certainly removes some massive, massive, talent from the UFC’s 205 division. But, the UFC has rising forces like Dominick Reyes and Aleksandar Rakic, as well as dangerous vets like Glover Teixeira and Jan Blachowicz.

Bellator meanwhile, has Bader, Davis and the new champ Nemkov, who could unquestionably hang with any of the UFC’s top light heavyweights now. They also recently signed Corey Anderson, who was a top, UFC contender.

Then there’s White’s claim they “let go” all the fighters who are Bellator’s top light heavyweights.

First off, Nemkov never fought for the UFC. In terms of fighters like Anderson, Davis, Bader, Gegard Mousasi and Lyoto Machida, White would likely claim the UFC could have topped Bellator’s offer, if the company wanted to.

So, that’s why, likely in his mind, they were “let go”. But, technically, Coker’s right. Those fighters weren’t released.