A leak claims Superman and Shazam may have post-credit cameos in Black Adam but the plot synopsis doesn't line up entirely.

More Black Adam announcements and leaks have come out aside from the casting of Aldis Hodge as Hawkman. And one of those leaks suggests the Superman-Black Adam crossover Dwayne Johnson is allegedly lobbying for will happen sooner than we figured.

YouTube pundit and scooper Warstu proffers in a recent video Henry Cavill appears as Superman for the first time since Justice League, and The Snyder Cut of same, in a Black Adam post-credit scene where he confronts Teth-Adam after he retakes Kahndaq.

The alleged post-credit scene is also said to feature Billy Batson and Freddie Freeman watching news of Black Adam’s reappearance. Freddie remarks Adam is like Billy only “way more bada–” before they decide Billy should go talk to him.

They admit at the same time they aren’t thinking this through very well after Billy transforms and knocks out the power in his neighborhood.

With Dany Garcia, Johnson’s business partner and ex-wife, as Cavill’s manager, it shouldn’t be too hard for Warner Bros. to greenlight these cameos, says Warstu. Johnson, don’t forget, is pushing heavily for a shared universe.

Warstu cautioned some of the details could be fake, even the above, but he still lays out the story of Black Adam found in the new leak. It corresponds with previous ones though it possesses noticeable differences.

Drawing from the comics, Teth-Adam is a slave chosen to be a champion gifted the power of the gods by the Council of Wizards. Nabu, who also gave Doctor Fate his powers, is in the film and sits on the Council.

Nabu selects Khufu and Chay-Ara, the ancient avatars of Hawkman and Hawkgirl (which is the first mark against this leak’s accuracy), to be protectors of Adam’s homeland. Adam isn’t cool with that and doesn’t get along with Khufu.

Naturally, they fail to prevent the murder of Adam’s wife and the attempted theft of a mystical amulet mentioned in a prior leak. When Nabu and the Council refuse to revive her, Adam kills them and falls victim to the Seven Deadly Sins – as seen in Shazam!

Khufu manages to defeat Adam and traps him in a sarcophagus using the amulet until the modern-day when it is discovered in war-ravaged Kahdaq by a rebel.

Freeing Adam, he helps the wounded guy fend off a death squad. He takes Adam in to live with him, his sister Adrianna, and her son.

Adam regains his memory, it goes on, and vows to free the people from the yoke of war and the dictator ruling the country. Adrianna has misgivings against violence but she and her family are under Adam’s protection.

Khufu and Chay-Ara reincarnate as Carter Hall and Kendra by this point and seek out Nabu. Mortally wounded fighting Black Adam, he “died” to retreat to his spirit element.

Wanting to fight Black Adam and knowing they can’t do it alone, Nabu reminds them of the disbanded Justice Society (the government betrayed them but that’s another story) and tells Carter the birth of new heroes, descendants of JSA members, prove it’s time to form a new team.

The hotheaded Al (Atom Smasher) and the “bubbly geek” Maxine – who have an attraction – are recruited and all head to Kahndaq and the location of a hidden headstone and the amulet Nabu showed them.

They go to retrieve the amulet, but Adam shows up and fights them to take it back. Adam is then ready to kill Carter if he doesn’t give him the location of the headstone. Maxine caves and tells Adam where it is to save Hawkman.

Adrianna also steps in to convince Adam to relent. He does but proclaims it time to save Kahndaq and his people which he says Carter failed to do. 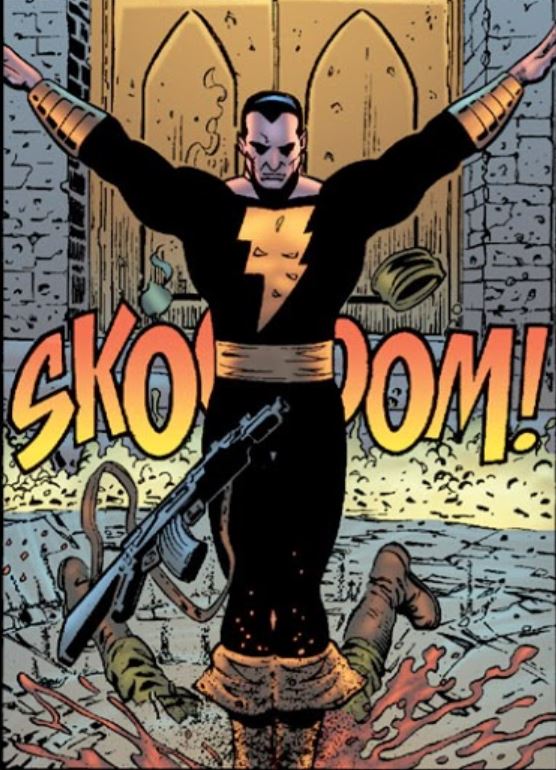 The headstone is in the capital with the dictator, surrounded by impenetrable walls, in the area Adam was buried. Kendra and Al reconnoiter but he tries to stand up to military forces and is wounded, forcing the JSA to regroup.

Adam stages an assault with rebel support on the dictator’s reinforced palace. Adrianna worries about casualties but Adam wants them to rise above slavery and fear.

Hawkman and JSA re-enter the battle and there is “a massive fight” between him and Black Adam that destroys everything around them.

Maxine and Kendra try to reason with them and Carter eventually talks sense into Adam, pointing out he’s destroying the place he swore to protect.

Adam moves from there to continue his mission, breaking through defenses and into the palace throne room.

Inside, the dictator is killed by his top advisor who is really “Baku,” the killer of Teth-Adam’s wife. He sold his soul to be reborn and eternally pull the strings of “power-hungry fools” and enslave the people as revenge on Adam.

Taunting Adam, Baku reveals Black Adam’s powers are weaker than he thought and once the amulet is reunited with the headstone, a “holy hell” of magic is unleashed, outmatching the JSA and Adam. 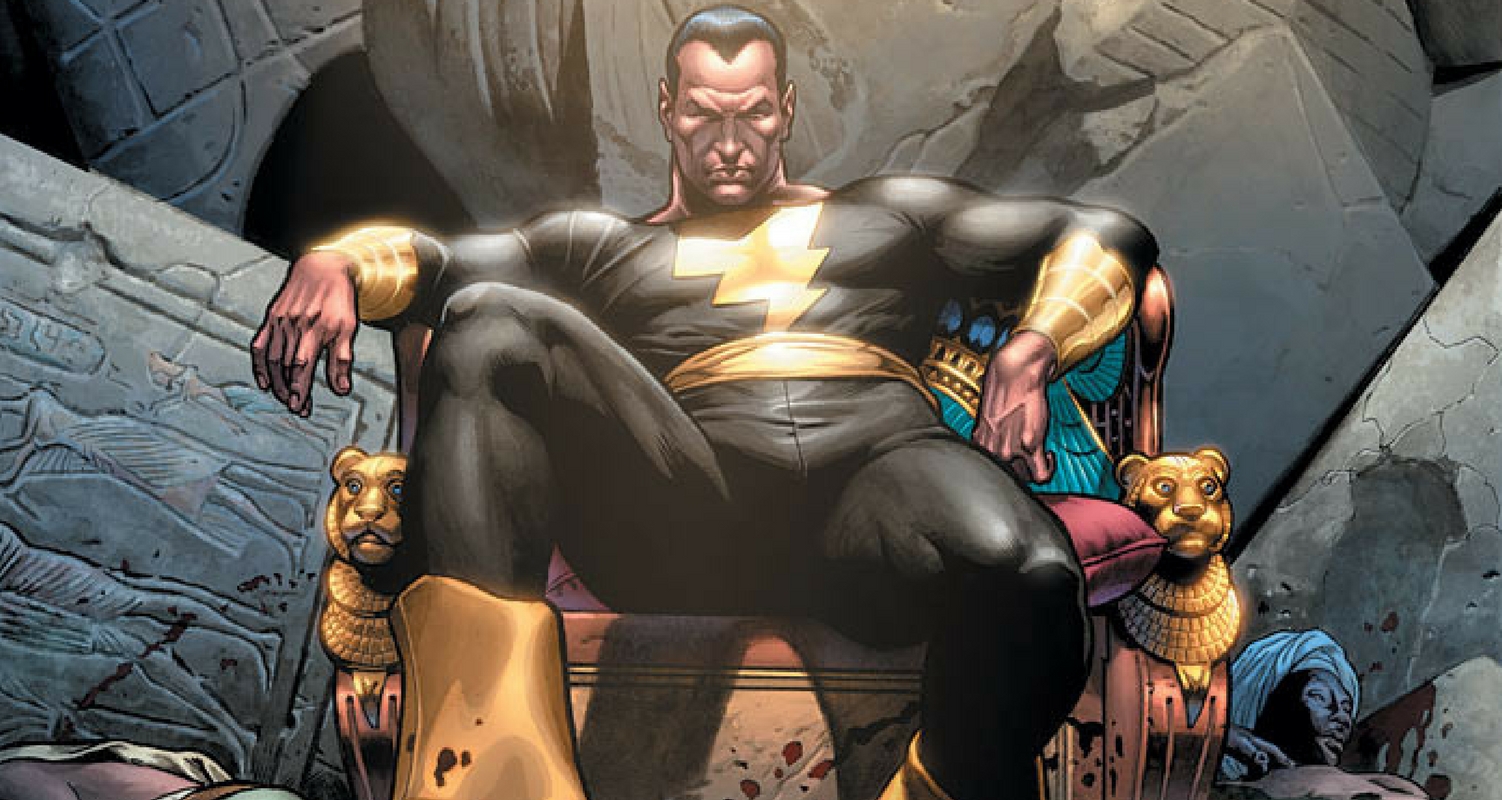 Doctor Fate is finally drawn into the fight, turning it into a mystical battle. Elemental monsters and the undead are risen to fight against Fate, Adam, and the JSA – they get overwhelmed.

Baku makes the people kneel before him and he is on the verge of executing Adam when Adrianna stands up to him and urges others to do the same. Their courage and faith unlock the whole of Adam’s power and he rallies back, beating Baku.

From the sound of it, Adrianna is critically injured and needs the gods to revive her, like Adam’s wife. He prays a goddess hears him, Adrianna is resurrected as Isis, and she makes it rain in Kahndaq for the first time in ages. The peasants rejoice.

All is good between Adam and Carter, who realizes Kahndaq needs a leader, but he vows to come back if lines are crossed.

Dr. Fate teleports Baku away to administer punishment and the JSA gets in a jet. On the trip home, Carter says he wants to find and train more heroes.

These plot details are similar to what we’ve heard about so far except they leave out the final-act return of Black Adam’s dead wife who turns evil and genocidal according to one leak.

It also omits Ibac who is often rumored lately to be in the film and has a shortlist of actors eyed to play him.

Ibac was revamped in the New 52 as a Mid-East warlord and old enemy of Teth-Adam. He was the one who enslaved Kahndaq and carried out the murder of Adam’s family.

On the flipside, Hawkgirl is no longer in the script as far as we know, therefore this leak is likely based on an early draft, if it’s accurate at all.

In an aside, Warstu reports Ryan Reynolds was negotiating with Warner Bros. to play Hawkman but talks fell through. You can blame his schedule. Warstu, unlike some of us, is glad really; he didn’t care for Reynolds’ Green Lantern all that much and still doesn’t.

Speaking on Black Adam’s delayed production, Warstu observed the film’s shooting schedule isn’t going to be as smooth as it would have pre-COVID and with everything else going on in the world.