Dana White's having another claim refuted, as Dustin Poirier says he does indeed, want to battle Tony Ferguson.

Dustin Poirier has appeared to be on good terms with the UFC for a long time. But, the former interim champ was quick to shoot down a comment Dana White’s made, about the fact Poirier – Tony Ferguson isn’t happening. 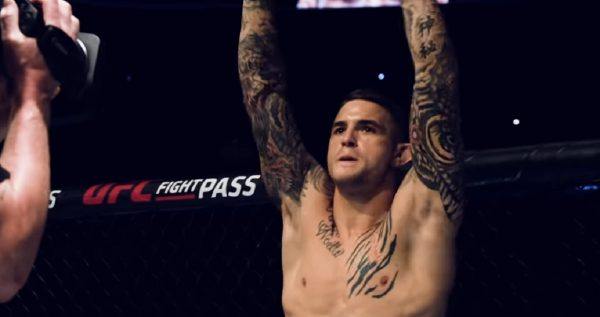 The UFC was hoping to book a fight between Poirier and Ferguson for its upcoming schedule, and the promotion was targeting the match-up for October 24th. But, not long ago, Poirier reported that he and the UFC had failed to come to terms for the fight.

Poirier, one of this generation’s top lightweights, made it clear that he wasn’t happy with what the UFC was offering for the bout.

Well, following the latest card in the Dana White Contender Series, White was asked to comment on why the Poirier – Ferguson bout isn’t happening. White said this  (quotes via MMA Fighting).

“Listen, I like Dustin,” White said. “I’m not going to sit up here and say anything negative about Dustin.

“Negotiating yourself out of one is one of the ways you can do it. So for whatever reason, he didn’t want to take this fight. Only he knows that.”

Well, it wasn’t long before Poirier took to Twitter to insist that yes, he does want to fight “El Cucuy”.

“I WANT THE FIGHT”

I WANT THE FIGHT https://t.co/fGrTT8QFbY

If you’ve followed White over the years, then the spin he’s attempting here, shouldn’t be a surprise.

Is it possible that Poirier asked for some ridiculous sum of money that he knew the UFC wouldn’t table, just so he doesn’t have to fight Ferguson? It’s not impossible.

But, Poirier seemed quite keen to fight Ferguson before. He relayed he wanted to fight “El Cucuy” a while ago. So why would he change his mind all of a sudden?

Does Poirier, who has fought a who’s who of elite lightweights, seem like someone who would go this route just to avoid fighting Ferguson?

Let’s keep in mind he’s fought Khabib Nurmagomedov, Max Holloway and Dan Hooker in his last three outings. Prior to that, he defeated Eddie Alvarez and Justin Gaethje (who beat Ferguson earlier this year).

If he was concerned about say, traveling to Abu Dhabi in the midst of a pandemic, wouldn’t he just say so?

What seems more plausible, is that this is just another example of the UFC trying to keep fighter compensation in check.

It will be interesting to see what unfolds from here with “The Diamond”,  and whether tensions with the UFC ratchet up.