During and after Paulo Costa’s [1] one-sided loss to Israel Adesanya [2] last weekend, more than a few people questioned his approach in the fight. Well, since he was stopped by the middleweight champ at UFC 253, Costa’s indicated he couldn’t perform at his best. 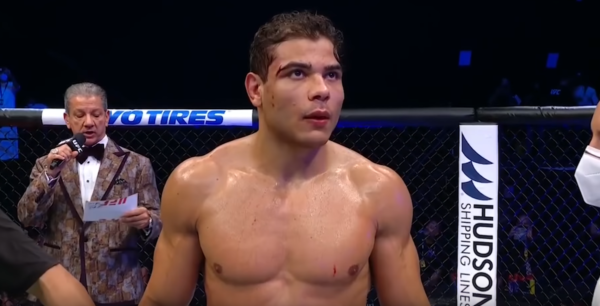 Leading up to UFC 253, the consensus seemed to be that Adesanya would likely retain the title, but that he was in for a massive, massive test. The argument being that Costa was and or is, one of the more durable, aggressive and powerful fighters in the division.

But, in the opening round of the UFC 253 headliner, Costa stayed back for the most part. Even when Adesanya continued to batter his lead leg with kicks.

In round two, Adesanya sent Costa to the deck with a huge hook and finished the fight from above.

Well, not long after the decisive loss, Costa made the following comment in an Istagram video (quote via MMA Junkie [3]).

“Hello, guys. I’m here to say thank you for all the support. I’m back already stronger and smarter.

We had some mistakes, but the next time I will do better and get my gold,” Costa said. “I’m not here to excuse something happened.

It doesn’t matter. I’m focused on my goal.”

And then, after Costa apparently saw video of the fight’s final moments, the Brazilian posted another video.

A visibly fired up Costa wasn’t happy with Adesanya’s lewd, post-fight celebration, which the champ reportedly characterized as a “rawdog” act (quotes via MMA Junkie [4]).

Nobody will stop me. Nobody can stop me. I am (coming) for you Adesanya. I want my rematch – and you know I’m waiting for you.”

“Something happened before the fight,” Costa said. “I’m not (making) an excuse here to my people and my fans.

Adesanya is human trash. This has become a grave situation ! I saw his disgusting action after fight and I will not stop until I have my revenge. @danawhite make this rematch happen. [5]

Does it all make sense?

Adesanya’s post-fight actions aside, the champ’s boosters and others might just argue that Costa is in fact, making excuses. The two had a bitter rivalry and Adesanya pretty much cruised through the previously undefeated fighter.

But…as noted above, during and after the bout more than a few observers questioned why Costa fought the way he did, so tentatively. Even Dana White raised this question after the fight.

Was Adesanya in Costa’s head? Did he freeze up after taking some hard kicks? Did Costa and his team think he needed to conserve injury for the championship rounds?

Or, was he dealing with some sort of issue that restricted his mobility or cardio?