Ottman Azaitar [1] needed less than two minutes at UFC Vegas 10 to record his 13th pro win. But, after recording another finish, the lightweight relayed the original plan was to have him take his time, and get some Octagon minutes in… 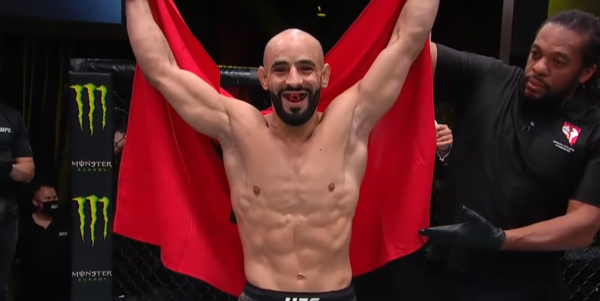 Azaitar “cannot stop” himself when he smells “blood”

The rising fighter took on Khama Worthy in the co-headliner for UFC Vegas 10, [2]After Azaitar rocked Worthy with a big punch just after the one minute mark, the 3o-year-old finished the deal with a swarm of punches.

While talking to Michael Bisping in his post-fight, on air interview, Azaitar reported his team was looking to have him fight three rounds. Then, while talking to media afterwards, the undefeated fighter said this (quotes via MMA Junkie [3]).

“You never know how it goes,” Azaitar said. “You prepare. You give your best in the preparation, and you have to be ready for every situation in the fight.

Me, I go every fight for 15 minutes and try to put my best and put my whole efforts in these 15 minutes. But sometimes it comes like in this situation.”

“You smell blood, and me, when I smell blood, I cannot stop myself,” Azaitar said. “I have to go for it. I think this is also what the UFC and the people want to see.

The whole fans deserve to see this, and yes, I mean every fighter can fight without taking risks, and this will be maybe a win, but you win a fight but you don’t win the heart of the people.

You have to give the people to see what they want to see: an exciting fighter.”

You can understand why coaches want to see up-and-coming fighters get more experience in the cage, and have them fight for more than a round. After all, as fighters rise up the ranks, sooner or later, they run into someone who will take them into the deep waters of round three, four and five.

But, it’s certainly true fans like to see quick, highlight reel finishes. That’s why fighters who score quick stoppage wins, typically have a much shorter road to a title shot, than those who grind out decisions.

What’s next for Azaitar?

All that aside, it will be interesting to see who the UFC books to fight Azaitar next. In his UFC debut last September, he knocked out Teemu Packalen in the first round.

While talking about his hopes for the short-term future, Azaitar said this.

“I take everything, everyone, every step, every opponent seriously and prepare for any opponent,” Azaitar said. “I train very hard and give my best. I am open for anything.”

So, maybe we’ll see the UFC tap an accomplished vet to face Azaitar in his next outing?