Madden 21 has had a rough go since it launched Friday. Fans seem to be pointing at the fact that not only is the game seemly copy/paste from the last entry. It has been plagued with glitches since launch

Madden 21 has had a rough go since it launched Friday. Fans seem to be pointing at the fact that not only is the game seemly copy/paste from the last entry. It has been plagued with glitches since launch.

Because of this, its Metacritic score is speaking volumes to how upset fans are at the quality of the current iteration of the game.

Thought many access media critics have been giving the game a decent score of 80; such as Screen Rant and Attack of the Fanboy. User reviews have been scathing, to say the least with only 19 positive reviews and over 1,700 negative reviews.

Why some much anger you might ask? As mentioned the game has been plagued by glitches, and bugs since day one. 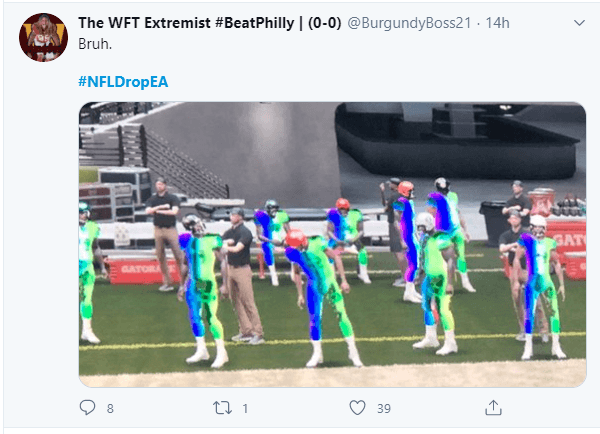 Add to that the fact there has been no changes to its core game modes it’s a wonder how EA Sports managed to misstep this hard on something so cookiecutter.

There were also some rather notable Twitter accounts that chimed in about it, in addition to the thousands of ticked off Madden players. One such was YouTuber Yong Yea who said, “EA’s Madden 21 surpassed Warcraft 3 Reforged to become the worst user rated game on Metacritic, tied with Division 2 DLC. Madden 21 is basically a Madden 20 patch sold at full price, except many technical issues aren’t fixed, and people are sick of it”:

Even PC Gamer took note. Saying a tweet, “Metacritic users give Madden NFL 21 a record low score, one calling it ‘Anthem in cleats'”: 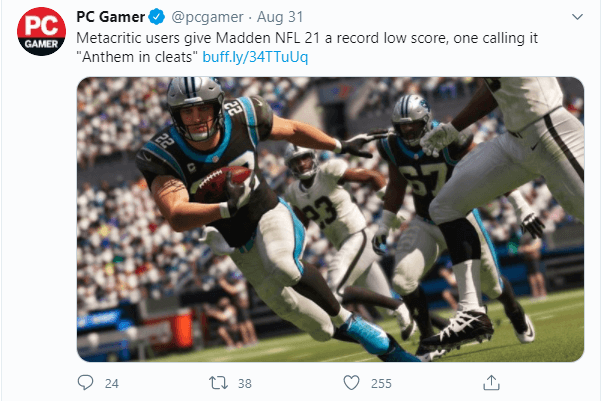 Even though that’s a lot of bad press for EA Sports, one user used a gif to express how he felt EA was taking the online pushback:

So what exactly is causing all of these low scores, and angry players? Well, it seems to be a few things. First as mentioned by Yong Yea, Madden 21 is just a carbon copy of Madden 20. You’re usually paying full price for a small patch update.

Then there is the new content that honestly is just another revenue stream for the studio.

Called “The Yard” it’s basically a way for EA Sports to monetize cosmetics. Then their’s Madden Ultimate Team which seems to utilize a pay to win aspect. Because of all of this, players began a new hashtag, #NFLdropEA in an attempt to have the NFL end its exclusivity contract with the studio.

One user, ShaKKDisel, called out the company, “Copy and Past much? Smh”:

User @scottyb29987995 said used an example of a glitch he dealt with while playing, “#nfldropea even in the same circle still can’t seem to tackle.. btw that was the last play to win”:

Another user complained about the studio’s lack of details for the game:

EA signed their exclusivity deal with the NFL in late 2004, insuring what would become a monopoly for over a decade. With the renewal, that deal now runs through 2026.

There hasn’t been robust competition in football simulation video games since 2005 when Madden and ESPN NFL 2K5 went head to head. Players overwhelmingly consider NFL 2K5 to be one of the best football video games of all time.

Most players who enjoy sports simulation video games will tell you that all they want is an immersive experience. Whether it’s the NFL, NBA, MLB, or NHL, they just want to manage their favorite teams from the perspectives of players, coaches, and owners.

When there was competition in the industry, both EA and 2K delivered great products that represented the NFL experience well. Once EA was the only game in town, that standard of quality was all but gone.

It remains to be seen if the #NFLdropEA campaign will truly affect change, but it sure will be fun watching it.

One thing is for certain, you should never underestimate the passion of NFL fans.

Have you played Madden 21 yet? What are you thoughts and experiences with the game?