On Saturday, Jan Blachowicz became the second Polish fighter in UFC history to win a title, and he received quite the welcome back home.

After recording the biggest win of his career, and one of the greatest victories in Polish MMA history, Jan Blachowicz received a hero’s welcome upon arriving back home. 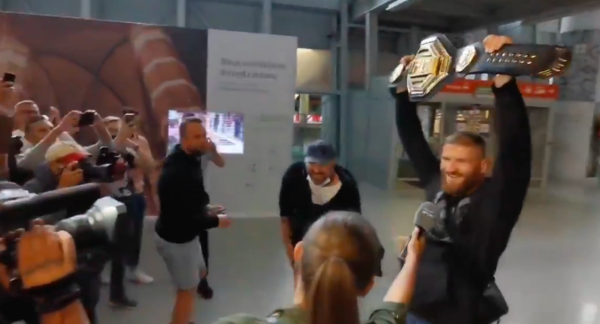 Fans swarm Blachowicz and celebrate at the airport

The longtime contender was booked to battle Dominick Reyes for the vacant, light heavyweight title at UFC 253, on account of a three-fight winning streak that included KO wins over Luke Rockhold and Corey Anderson.

Leading up to the bout, the consensus seemed to be that Blachowicz was definitely a threat to beat Reyes, but the latter would likely prevail. After all, a lot of people scored Reyes’ decision loss to Jon Jones in February for him.

Well, Blachowicz buzzed the MM world by rocking Reyes with a huge shot in round two, and then finishing the deal with follow-up shots. With the championship win, Blachowicz joined now-former strawweight champ Joanna Jedrzejczyk as the other Polish fighter to hold UFC gold.

As you can by watching the clip below, a lot of happy, happy fans were in attendance to welcome Blachowicz home.

Who’s next for the new champ?

After his win, Blachowicz called for a bout with the former champ Jones, who dropped the title to pursue a run at heavyweight. “Bones” teased interest in returning to 205 to fight Blachowicz, but chances are he’ll take on the winner of the November 7th, Thiago Santos – Glover Teixeira bout next.