Hollywood star Kirstie Alley just teamed up with James Woods to blast the Oscars for new diversity rules for its Best Picture contenders.

Actors James Woods and Kirstie Alley demolished the Oscars’ new set of stringent “diversity” rules for Best Picture contenders. These conservative Hollywood heroes were quick to point out the discriminatory and anti-artistry nature of the new rules.

The Academy of Motion Picture Arts and Sciences – what we all know as the Oscars – claim their goal is to increase representation and inclusion in Hollywood. In other words, and just in case you didn’t realize this before, this is Hollywood putting their “woke” status in writing.

After the announcement, Hollywood stars Kirstie Alley and James Woods each took to Twitter to slam the Oscars for going full “woke” and turning the entertainment industry into a political weapon.

Alley, however, went more in-depth in attacking the Oscars for the new inclusion and diversity standards.

I’ve been in the motion picture Academy for 40 years. The Academy celebrates freedom of UNBRIDLED artistry expressed through movies. The new RULES to qualify for “best picture” are dictatorial .. anti-artist..Hollywood you’re swinging so far left you’re bumping into your own ass

This comes after the Academy announced in a press release that starting in 2024, it is limiting Best Picture award nominees to those that can meet requirements that “encourage equitable representation on and off screen.”

The lengthy list of requirements involves more people of color taking positions on film sets, from interns to starring roles on camera, and everything else in between.

The press release stated that two of the following four standards must be met to qualify for being a Best Picture contender starting in 2024:

Here’s a look at the standards for on-screen representation, themes, and narratives. 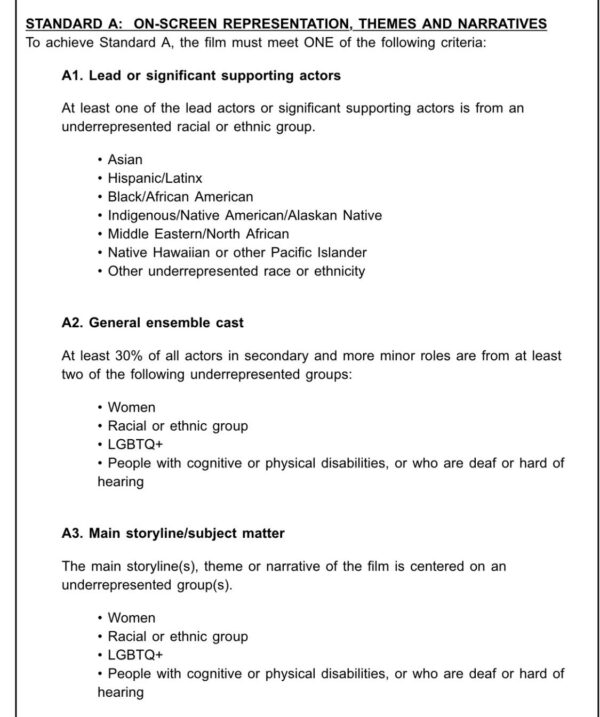 Kirstie Alley Doubles Down on Oscars

Fox News reported that Alley doubled down in another tweet that has since been deleted.

The “Cheers” star’s deleted tweet read, “This is a disgrace to artists everywhere,” she wrote. “Can you imagine telling Picasso what had to be in his f–king paintings. You people have lost your minds. Control artists, control individual thought .. OSCAR ORWELL.”

Alley unsurprisingly received tons of backlash for her tweets from so-called “tolerant” leftists.

One such person was Oscar-nominated director Ava Duvernay, who replied to a tweet of Alley’s by posting a GIF showing Denzel Washington slamming a door in someone’s face.

However, Alley and Woods are not alone in calling out the insanity of the Oscars’ new “woke” rules.

This is right. The Oscars used to be, just like the movies, something we all shared.

Woke Hollywood turned it all into a weapon they could use against anyone who disagreed with their politics.

This is how Hollywood destroyed itself, like the @nba, @nfl, and @mlb just did. https://t.co/IiySze0cwV

So minority filmmakers will be left wondering if their movie was actually good or the Academy simply had a box to check.

Either way, I will continue to not watch.

Of course, we’ve known for a long time that Hollywood was getting ‘woke’. And that movement included the Academy and the Oscars.

But still, somehow, it’s sad to see this hallmark Hollywood institution formally submit to the radical left in such a ridiculous way. I guess you could say that days of the classic Hollywood we loved are simply Gone With The Wind.

We’re living in a time where conservative celebrities are either closeted or blacklisted. So, technically, James Woods and Kirstie Alley their own Hollywood minority. Does anyone else see the irony here?

Ava DuVernay To Develop DC Comics’ Naomi For The CW

Should Miley Cyrus’ Sister Noah Meet The Same Fate As Roseanne Barr For Her Racial Slur?