Israel Adesanya and Paulo Costa have been feuding for months. But, when they ran into recently in Abu Dhabi, emotions were kept in check.

On account of what Israel Adesanya and Paulo Costa have said about each other in the preceding months, the two appear to have some serious issues ahead of their fight Saturday.

But, when the middleweight stars ran into each other in Abu Dhabi, where UFC 253 is going down, no fireworks ensued. 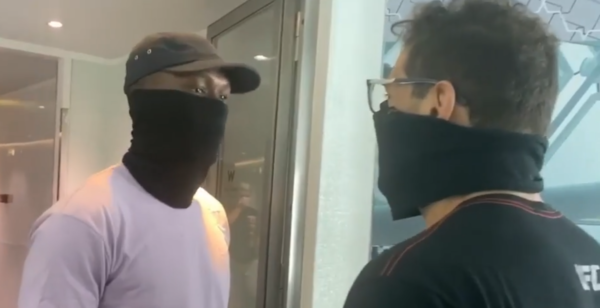 Adesanya and Costa keep it respectful

Recently Costa’s manager, Wallid Ismail, posted the video below. As you can see, based off the video clip, the middleweight champ and Costa kept it pretty respectful.

The two do appear to make some comments about each other’s physique, which is nothing new for them. But, all-in-all, considering what they’ve said about each other previously, it was very professional exchange.

Warriors only fight in the cage, they may have a personal problem, but they will solve everything in the octagon🚀🚀🚀🚀🚀 os Guerreiros so lutam no cage, podem se odiar, mais vao resolver tudo no Octagono 26 de setembro AO VIVO no @canalcombate

Of course, the two are going to have the change to settle their differences in the cage, in just a few days. So why risk ruining that with any type of pre-fight incident?

Further, as any big MMA fan knows, often fighters sling trash talk to promote a fight. So, the two likely aren’t on the best of terms, but they may not have as big of a beef as some think.

Here is the line-up for UFC 253, which is going down on Yas Island in Abu Dhabi, Saturday (line-up via MMA Mania).

*Fight card, bout order and the amount of matches subject to change

UFC On ESPN: Be On Lookout For Prospect Cheyanne Buys

Jose Aldo Remains One Of The Greatest Fighters Of All-Time