If you were surprised last week to hear the news Ray Borg [1] was retiring from pro-fighting at the age of 27, well, “The Tazmexican Devil” has announced he’s decided against hanging up the gloves. 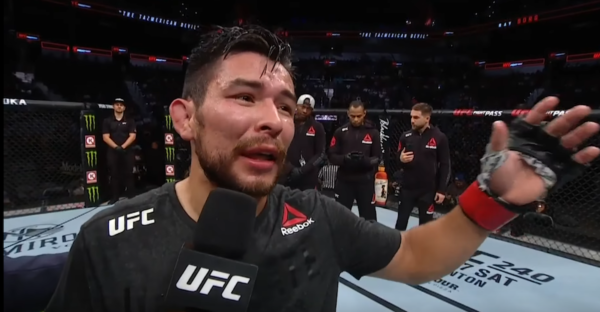 Just last week, Borg announced he was walking away from the fight game. At the time, Borg said he had decided to move onto the “next chapter” of his life. [2]

Due to how young Borg is, and how talented of a fighter he is, the news likely surprised some. The announcement also came not long after it was reported Borg had been let go by the UFC.

On the other hand, since Borg’s son has been diagnosed with the brain condition hydrocephalus, and he was forced to withdraw from some fights due to his son, not everyone was shocked.

Well, since then, Borg spoke with Sherdog.com. [3]In the interview he relayed his retirement decision was made in haste, and on account of depress and stress (quotes via MMA Junkie [4]).

“To be truly honest, my depression and stress got the best of me, and I was really in it that day. I was just done. I just didn’t want much more of the sport.

I have a family. I have a wife, I have a son, and the first thing I thought to myself was, ‘I let myself get cut from the UFC, and I’ve got to put food on the table.

I’ve got to provide, keep the lights on. I think the best thing to do for myself and my family is to straight up get 9-to-5 (job).’ As gut wrenching as something like that is to say, I’ve got a son. He’s got medical bills.

And while discussing what led to changing his mind about retiring, Borg said this.

“I had intentions on retiring. I really did,” Borg said. “But I started getting messages from people, and the ones that really hit me hard were messages from kids who I used to coach and train, young kids who come from troubled beginnings and things like that.

And I always strived and told them to work hard, and they can get themselves out of the gutter…

“Then I talked to me wife, and to be honest, my wife didn’t really know I decided I was going to retire.

On a good day I’m unbeatable. I just couldn’t do it. I owe it to too many people to get myself out of this gutter and try to make it.”

What’s next for Borg?

So, it will be interesting to see where Borg ends up fighting. On account of his skills, and who he’s fought (the list includes Demetrious Johnson), chances are he’ll find fights with another big stage promotion.