Talk about Conor McGregor returning to the cage had quieted down somewhat in recent weeks. But, following a recent tweet the retired superstar made, that’s likely changing, real quick.

McGregor calls for UFC to “line” up Nate and Nick Diaz

As you surely know, a few months ago, McGregor announced he was retiring. At the time, the former lightweight and featherweight champ said the sport didn’t excite him any longer. He also expressed frustration in the fact his next bout hadn’t been booked.

When 2020 began, McGregor repeatedly said he wanted to fight three times this year.

Well, fast forward to September, and recently Nick Diaz’s manager reported that the Stockton star is preparing to fight again in 2021. In fact, Diaz has reportedly done a test weight cut, in preparation of making a comeback.

That news followed recent reports that the UFC is working on booking a rematch between Jorge Masvidal and Nate Diaz. So, that’s likely why BT Sport recently shared out a pic that showed the Diaz brothers. To which, McGregor responded with this. 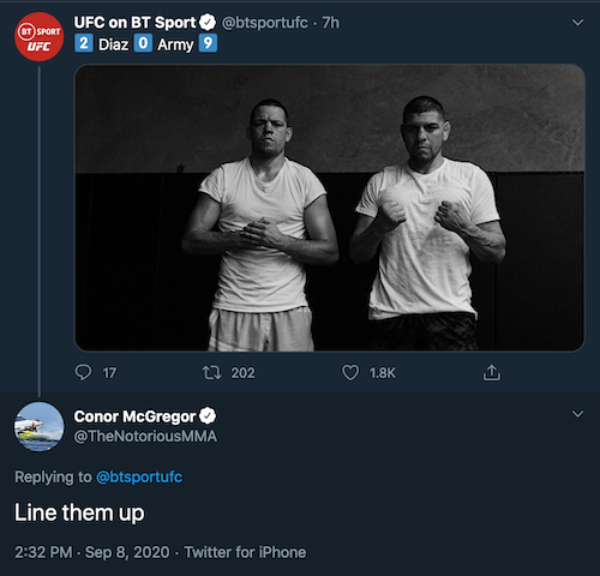 Could these fights happen?

Before McGregor ‘retired’ for the third time in recent years, there was always talk about him facing Nate Diaz again. After all, both bouts were massive, and each man holds a win over the other.

But, if the UFC is proceeding with Masvidal – Diaz 2, could a fight with McGregor and Nick get tabled? Maybe?

There’s no question that a fight between McGregor and Nick would be absolutely massive. The question is, does the UFC want to run the risk of punting McGregor’s next shot at the lightweight title?

Yes, a bout with Nick would be at welterweight. But if Conor were to lose, it would definitely hinder the argument he deserves to fight for the 155 title (as many already believe McGregor needs to do more  before that happens again).

Then there’s also the question of whether the UFC wants to book such a massive fight while the COVID-19 pandemic continues, and no fans can attend.

But, in a sport like MMA, you never know right? It would certainly be a way for the UFC to keep the sports world fixated on the promotion and MMA.