Conor McGregor [1]may say he’s retired, and he’s done so again, but one could certainly argue the star’s actions indicate otherwise.

McGregor says he agreed to USADA test on his yacht

Earlier this summer, McGregor announced he was hanging up the gloves. At the time, the former featherweight and lightweight champ said he isn’t excited by the sport anymore, and he also relayed he wasn’t happy about the fact his next bout hadn’t been booked.

When McGregor set out to begin 2020, he repeatedly said he wanted to fight three times this year. But, after his win over Donald Cerrone in January, and as the COVID-19 pandemic began, his next bout was never signed.

Well, since McGregor has retired before, only to fight again, the consensus is that he’s not really done.

Recently the 32-year-old shared out the image and comments below on Twitter. McGregor is “retired”, and yet, he’s still, apparently, doing USADA tests.

What’s going on here
@ufc
? USADA have just arrived to my yacht this morning for testing?
I’ve retired guys!
But go on then, I’ll allow them test me. It’s all natural here baby!
Forever and always, God Bless Folded hands
180km across the Mediterranean Sea tomorrow! LET’S GO!! 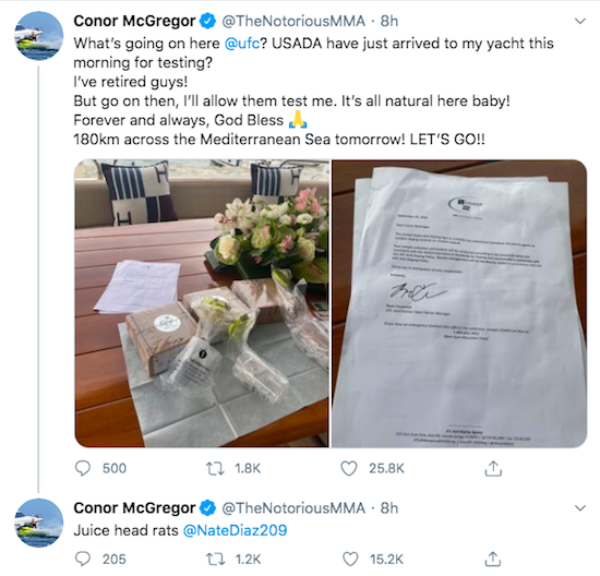 McGregor also tweeted out at Nate Diaz, marking the second time in just a few days he’s brought his old foe up. A few days ago, after it was reported Nick Diaz is preparing to make a comeback in 2021, McGregor teased fights with both. [4]

So, there are certainly reasons to believe that we could see McGregor return to the cage, if the right opportunity comes along. Especially when the pandemic is over and fans can attend events.

Before McGregor ‘retired’, he repeatedly called for a rematch with lightweight champ, Khabib Nurmagomedov, who submitted him in 2018. Nurmagomedov has argued that McGregor needs to defeat a top contender, like Dustin Poirier or Tony Ferguson, before he deserves a rematch.

Khabib is booked to fight Justin Gaethje on October 24th, and UFC President Dana White has said McGregor could face the winner. Nurmagomedov may not agree to that match-up, if Conor remains on the sidelines in the interim. But, if Gaethje beats Khabib at UFC 254, he would almost certainly welcome fighting McGregor. It’s hard to imagine McGregor passing on that bout, or a rematch with Khabib.