It remains to be seen if Phil Davis will be the first man to challenge Bellator’s new light heayvweight champ, Vadim Nemkov. But the former champ called for a bout with Nemkov, following his win over Lyoto Machida on Friday. 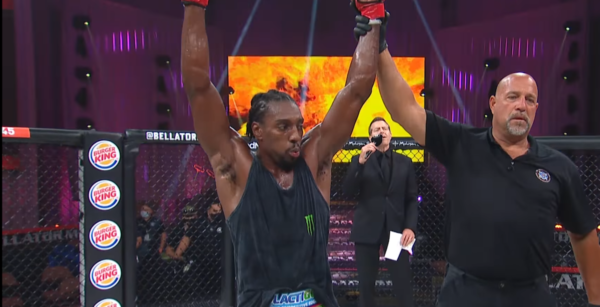 “Mr. Wonderful” faced Machida in the main event of Bellator 245 last night. After minutes, Davis was awarded the victory via a split decision win.

It marked the second time Davis had defeated Machida, as at UFC 163 in 2013, he recorded a unanimous decision win over “The Dragon”. With the win at Bellator 245, Davis moved his overall record to 22-5, and his winning streak to three.

So, on account of his recent run, Davis called for a bout with Nemkov afterward (quotes via MMA Junkie).

“He can fight whoever he wants to fight, but I know deep down inside a champion wants to fight that guy who was right on his ass,” Davis at the post-fight press conference. “I want that fight and I know he wants that fight.”

It will be interesting to see if Bellator taps Davis to fight Nemkov next. The two fought in 2018, and Nemkov won the bout via split decision. The rising Russian star recently won Bellator’s light heavyweight crown, by stopping Ryan Bader.

“Corey Anderson, he deserves a veterans welcome to the Bellator family,” Davis said. “But that would be something to talk about and maybe, only maybe, if Mr. Nemkov isn’t available.”

Anderson moved to Bellator after being knocked out by Jan Blachowicz this past February. The former TUF winner had won four in a row, prior to the defeat.

Here are the complete results and highlights for Bellator 245, which took place in Uncasville, Connecticut. The card also marked the promotional debut of former UFC contender, Cat Zingano, who recorded a decision win over Gabby Holloway.