As Renee Young prepares to depart from WWE, many are waiting for her to appear on AEW TV. Also, the latest on Rey Mysterio and his current WWE deal.

Days ago, we learned that Renee Young will be leaving WWE [1] following Sunday’s SummerSlam. She has not confirmed her next role, but there is lots of speculation about All Elite Wrestling (AEW).

First, some backstory on Renee’s status with WWE. In the Wrestling Observer Newsletter [2], they noted how she was working under two contracts.

The first deal was as an employee for WWE and the other was with FOX. After WWE Backstage was pulled from FS1, that contract was no longer valid.

Therefore, Renee was allowed to give WWE her notice without any complications with FOX. She opted to work through SummerSlam, but there is no word if WWE will have some kind of farewell segment.

When Cathey Kelly left, Triple H and the Undisputed Era gave her a sendoff following Takeover Portland in February. It was a really cool moment and hopefully Renee gets something similar.

As for Renee’s next step, there are likely to be several options from various TV networks. The most obvious choice is joining AEW alongside her husband and World Champion Jon Moxley.

When the news broke that Renee was leaving WWE, apparently AEW was caught off guard. Of course, there is interest from AEW and many believe she will eventually sign with the promotion.

The report continued how Renee might have to wait a substantial amount of the time before signing. Her WWE contract has a non-compete clause that is substantial.

Still, AEW knows Renee’s value and with Moxley already there, the transaction should be smooth.

Renee started with WWE in 2012 and quickly broke barriers [3]. She would be the first female to host an entire episode of RAW and also called matches from Saudi Arabia. 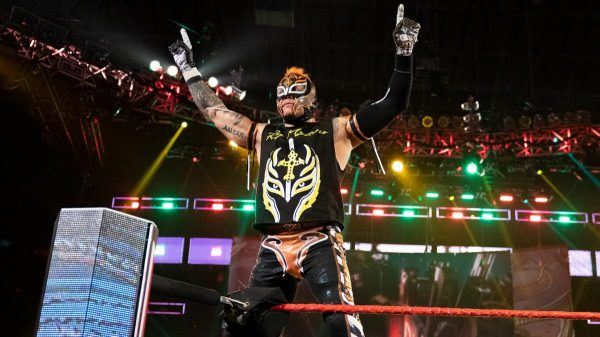 Following Extreme Rules [4], there was uncertainty if Rey Mysterio would return to WWE TV. His contract was up and he was working with a handshake type deal.

At the pay per view, Mysterio an eye for eye match to Seth Rollins. According to storyline, there is hope that Mysterio will be able to regain his sight.

It seems like Mysterio might have re-signed as both sides were close to signing a deal. According to the Wrestling Observer Newsletter, Mysterio is believed to have inked a three year deal.

If that is the case, the 45 year old will likely retire under the WWE name.

Typically, WWE offers talent three to five year contracts, but they do make exceptions. When they brought Mysterio back about two years ago, there was an option to leave after 18 months.

Currently, Mysterio has been working with his son Dominik. At Sunday’s SummerSlam, Dominik and Rollins battle in a no disqualification match.

Mysterio is preparing his son to take over the legacy he created. Dominik is still young, but is getting a huge match in his WWE debut.

There has even been talk of Dominik changing his name and wearing a mask [5]. We will know more come SummerSlam.

Look for the Mysterio family to continue their feud with Rollins and Murphy past SummerSlam. A tag team match is likely next and some have said Rey vs. Dominik could be the endgame of the program.