Marlon Vera clearly isn't happy about the fact he's not ranked in the top 15 of the UFC's bantamweight ranks, and "Chito" plans to change that at UFC 252.

Although Marlon Vera has scored plenty of impressive wins over the last couple of years, the Ecuadorian fighter is still on the outside of the UFC’s top 15 bantamweight ranks, looking in. Well, not only is “Chito” not pleased about that fact, he’s taken some pokes at the man he’ll face this Saturday at UFC 252, Sean O’Malley. 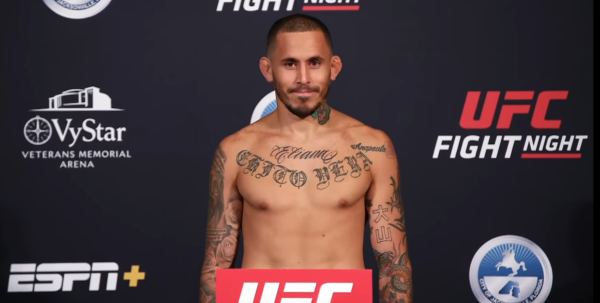 Vera plans to make big jump with win over “brat”

The 27-year-old Vera has been booked to face O’Malley in the co-headliner of Saturday’s card, even though he’s coming off a decision loss to Yadong Song. A lot of people, however, believe Vera actually won that fight and that he should be riding a six-fight winning streak as a result.

But, despite Vera’s recent successes, he’s not currently ranked in the top 15. Song, on the other hand, is sitting in the #13 spot.

Recently Vera appeared on the “Hablemos MMA” podcast. While discussing his upcoming bout with O’Malley and the rankings, Vera said this in Spanish (quotes via MMA Junkie).

“This is a fight that puts me close to the top five,” Vera said.” “We’ve seen fighters like Cody Garbrandt, who are coming off three defeats, beat someone who’s basically outside of the rankings like (Raphael) Assuncao, knocks him out, and gets in the top three above Pedro Munhoz, who knocked him out.

“So the rankings make no sense. But since this is a popularity contest, I beat the brat, and they have to put me in the top, so good for me.”

How about that? Now, would a win actually move Vera close to the top five? If he takes O’Malley out in impressive fashion, maybe he’ll move into the top ten?

But, when you consider “Sugar” is currently ranked #14, and how deep the bantamweight division is, it would be pretty shocking if Vera made that big of a jump.

In O’Malley, Vera (15-6-1) will face one of the UFC’s fastest rising commodities. The 25-year-old has gone undefeated to date – he’s 12-0,  and many believe that if he wins on Saturday, a main event bout with a top-ranked bantamweight will come next.

Leading up to the fight, however, O’Malley has been feuding with the likes of Cody Garbrandt, and not Vera. Could this mean he’s looking past “Chito”?

“I couldn’t give a sh*t if he’s underestimating me or not,” Vera said. “I don’t care what he thinks or does. What does matter is that Saturday, he’s going to have me in front of him and not those idiots that are replying to him, giving him fame and credibility.

“If I’m on top, why am I going to be trash-talking someone below me? It doesn’t have logic. The champion, himself, is replying to him. People need to use their brain a little more, but it seems they’re stupid because if I’m the champion and someone if the top-15 is talking sh-t, I’m obviously going to keep an eye on him and be ready for him, but I’m not going to be replying to someone who’s far from fighting for the title. But to each to their own. Thanks to them for making this fight bigger for me.”

O’Malley would be wise to not underestimate Vera, no question. UFC 252 will be hosted by the Apex Facility in Las Vegas.

UFC 253: Embedded Catches Up With Israel Adesanya, Others