HBO has released the first trailer for Unpregnant, an upcoming road trip film centered around a young woman's quest to receive an abortion.

HBO Max has released the first trailer for Unpregnant, an upcoming teenage road trip film centered around a young woman’s quest to receive an abortion.

Based on the novel of the same name by Ted Caplan and Jenni Hendriks, Unpregnant follows the story of Veronica (Haley Lu Richardson), a teenager who finds herself pregnant with a child she doesn’t want.

Not wanting to tell her boyfriend or her Catholic parents about her pregnancy, Veronica decides to have an abortion and scrambles to find someone who can help her receive the procedure.

Bailey and Veronica have never really been great friends, but when Veronica pleads her case, Bailey is more than happy to break laws and go on a crazy road trip to smash the patriarchy and help her new best friend abort her unborn child.

The two fast friends take a grand romping road trip, trying to find a facility that will perform the procedure, all the while sharing laughs and bonding.

However, abortion is no laughing matter.

In the trailer, it appears that the sole reason Veronica wants to terminate her pregnancy is that the child’s conception was a mistake.

Veronica also appears to leap immediately to terminating her pregnancy, rather than explore other options such as adoption or delivering the baby and becoming a mother.

The novel’s author Jenni Hendriks, who also wrote the screenplay for the film, discussed the book in an interview with Refinery29 where she was asked if she intended to make a statement about reproductive rights.

Hendriks responded, “Hell yes! Not only did we want to highlight how difficult access is, especially for minors, we wanted the central story to focus on something other than our main character’s decision to get an abortion.”

She continued, ” So often abortion stories focus on the debate over whether or not to stay pregnant, when in reality, sometimes it’s not a debate at all. We wanted to make sure our story highlighted that. “

“Also, if the story focuses solely on ‘the choice,’ it makes it feel like this is the only thing that’s truly important about the character. Veronica’s growth comes from her interactions with Bailey. It’s because of her that Veronica changes and becomes a better human. She is not just a person who got an abortion, she is so much more. Ultimately, people are more than this one decision and we wanted to make sure readers, especially young readers, felt that,” she concluded her response to the question.

In a separate question about the tone of the novel, Hendriks explained the book’s purpose is promote abortion, “We really believe humor is one of the best ways to make a subject less scary. Hopefully, by the end of the book, the reader is less nervous about the topic and can see that getting an abortion isn’t something that needs to be clouded in shame.”

Hendriks would also reveal that they had originally envisioned their novel as a film, “We actually envisioned it as a movie first! We wrote a script back in 2012 and tried to get it made but found the world was not ready for it (at least that’s what we tell ourselves).”

She continued, “But we really believed in Unpregnant and didn’t want to give up. It took many years, a novelization (our first time writing prose), and a big change in the political climate for this story to seem viable. Abortion is kind of the third rail in the film industry, and we are so happy to have found partners that are willing to challenge that mindset.” 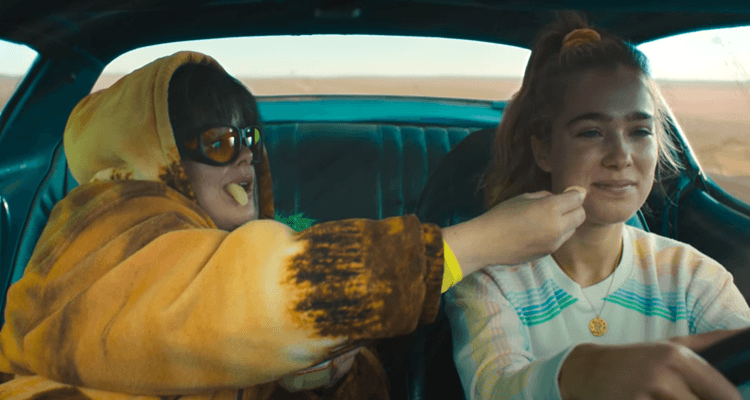 Regardless of your personal stance on the issue, this is willful ignorance and reckless irresponsibility marketing a film focused on such a serious procedure to impressionable young teens and women.

One reason this movie might’ve been made is to counter the pro-life movie Unplanned, which did well in theaters despite being suppressed on social media and in the press.

Whether the film was made in an attempt to pander to ‘woke politics,’ politically grandstand, or genuinely adapt an obscure novel, the bottom line is, Unpregnant’s concept appears to be unfunny and terribly executed, not to mention tasteless.

Conversations should be had about the controversial procedure, but glamorizing abortion in this way is nothing more than soulless and monumentally stupid.

Here’s the official description for the film:

“In Unpregnant, seventeen-year-old Veronica (Haley Lu Richardson) never thought she’d want to fail a test—that is, until she finds herself staring at a piece of plastic with a blue plus. With a promising college-bound future now disappearing before her eyes, Veronica considers a decision she never imagined she’d have to make. This never-taken-lightly decision leads her on a 1000 mile hilarious road trip to New Mexico over three days with her ex-best friend, Bailey (Barbie Ferreira) where they discover sometimes the most important choice you’ll make in life is who your friends are.”

What do you think about this movie? Share your thoughts below.