Booker T hinted Dixie Carter slept with talent while running Impact Wrestling. And, Chris Jericho's Fozzy had controversy with a show where few had masks.

There have been rumors that Dixie Carter slept with talent while running Impact Wrestling and one major star is not deny those claims. Also, Chris Jericho’s band Fozzy performed last night in-front of a crowd with no masks and people are not happy.

Impact Wrestling (then known as TNA) formed back in 2002. The early days were rough as the upstart promotion needed cash.

Then, Panda Energy entered the picture to help with the cash problem. In the process, Dixie Carter was named the president of the company.

Despite having no background in pro wrestling, Dixie would oversee Impact Wrestling.

Booker T, who worked for Impact Wrestling, discussed Dixie’s leadership on his Hall Of Fame Radio Show. Basically, he saw Dixie partying with the boys as a big mistake and even hinted that she slept with some talent; even though she was married and had children.

“I remember one time Dixie threw a huge party.  The celebration was, it was just after the show. There was no real reason to have a party. We are having a party just because the show is over with.  Let’s have a party.  That’s when I knew, brother, you get your paper, because this ship is going to sink real soon.”

“Business and pleasure just do not go together.  I’m the first one to say Dixie Carter was trying to do one of the greatest things one can do for the boys.  Securing guy’s jobs.  The company had a chance to do that, but Dixie Carter being in that position and not knowing if she was in shark-infested waters or what type of sharks they were, she just didn’t know that.  She didn’t know if it was a great white or one of the sand sharks.  She didn’t know.”

Two names there were rumored but never confirmed were Kevin Nash and Kurt Angle. When asked in interviews, Nash has hinted that the deed did take place.

By early 2017, the company was losing money, fans, talent, a decent TV spot and faith from the wrestling community. With few options left, Impact Wrestling was sold to Anthem Sports & Entertainment.

Dixie would become a minority owner with only 5% stake. Meanwhile, she has appeared on the WWE Network for a special about AJ Styles.

Booker T would leave Impact Wrestling in 2010, after three years there. He would return to WWE and wrestle on special occasions, but mostly became an on-air personality. 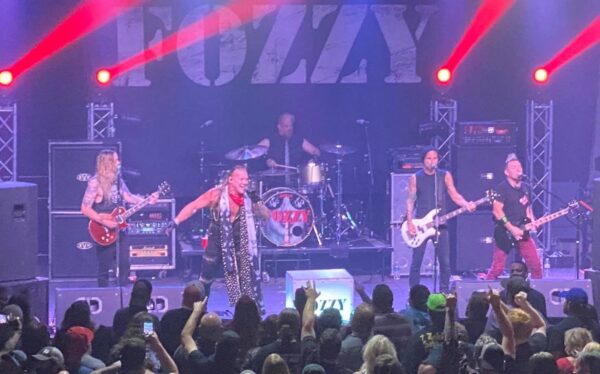 When COVID-19 starting spreading rapidly, the United States and most of the world went into lockdown. Pretty much everything was cancelled and that included concerts.

Currently, the situation is not improving, but places are starting to reopen in phases. Chris Jericho’s Fozzy had to cancel several shows in April and May as the pandemic grew.

Now, Fozzy  is back on the road as they played Saturday night from Minor, North Dakota. The venue had a large number of fans and many did not appear to be wearing masks.

While many were not happy the show proceed with such a large gathering, Jericho defended the performance.

“The reason why the shows have happened is because these states of North Dakota and South Dakota have low COVID cases,” said Jericho. “Less than 1,000 in both states; I think Florida had 9,000 today alone.”

“The venues are either outside, or they are half capacity,” said Jericho. “We hand out masks at the door, the temperature checks. We stay on the bus all day, the Fozzy crew and camp have been tested.”

We’ll have to wait and see if anyone catches or spreads the virus as a result of attending the show. But, the odds have to be high as large gatherings are hotbeds for contracting COVID-19.

Reaction From People Over Safety

Looks like @IAmJericho is Caught in the Mosh with no social distancing fans/masks/heavy breathing/etc. as much as I love @FOZZYROCK I can’t wait to hear their new single “Flirting with Death” #Fozzy #ChrisJericho https://t.co/lBzSnJx12N

Folks will defend Chris Jericho for having a Fozzy concerts with no social distancing, no masks, nothing… pic.twitter.com/kF1fH7rIND

The only one social distancing at this Fozzy concert is Chris Jericho’s hairline. pic.twitter.com/7o8djxahwN

Tfw you become the judas in your mind 🤦‍♀️🤦‍♀️🤦‍♀️ what a fucking joke. I love jericho but this is such a bad look for him, AEW, and fozzy pic.twitter.com/UPr6M1oOyC

Fozzy performed live in North Dakota last night. They say the venue was at 50% capacity but what does that matter when ppl are all close together, sweating and breathing heavily on each other?!? 🤔 pic.twitter.com/hf4HKJX2mX