A lot of people believe Justin Gaethje could push Khabib Nurmagomedov big time at UFC 254, and it looks like Daniel Cormier doesn't disagree.

Khabib Nurmagomedov has dominated pretty much all of the opponents he’s faced in the Octagon to date. But, due to the comprehensive game of Justin Gaethje, a lot of folks believe he will pose a stiff challenge for the champ, and Daniel Cormier is in that camp. 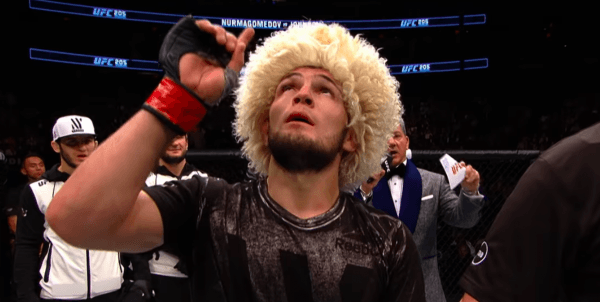 Gaethje has long been regarded as one of the best lightweights on the planet. But, the former WSOF champ has taken his game up a notch in his last few fights, particularly in the striking department.

After all, Gaethje has stopped four straight opponents and he locked up a fight with Khabib, by defeating Tony Ferguson, one of this generation’s greatest 155’ers.

Well, recently Cormier spoke with Kevin Iole from Yahoo Sports, ahead of his fight this Saturday with Stipe Miocic. While discussing Khabib’s upcoming, October 24th bout with Gaethje, the champ’s friend said this (quotes via MMA Fighting).

“I think he’s going to fight his toughest opponent,” Cormier said. “I think the vast majority of the world feels as though this is the toughest guy for him at 155 [pounds].

I think he’ll be okay. His ability to train and prepare for this and continue to work toward the goal that him and his father had together will allow for him to maybe come to terms with everything that’s happening around him.”

“Sometimes you need distraction and you need motivation in different forms,” Cormier said. “I think Khabib will use [his father’s death] as motivation. He’s a professional. He’s a pro’s pro and he’s going to prepare himself to the best of his ability.”

“Javier Mendez (American Kickboxing Academy head coach) is gonna corner me and do my fight and then, a month later, he’s going to head out to Russia and spend the last two months of Khabib’s training camp with him.

The team will prepare him to the best of his ability, but he’ll also be around his family who loves him, and now he’ll see Javier from here, another familiar face who will help him to get through a difficult time as he prepares to defend his title again.”

As noted above, Cormier isn’t the only person to opine that Gaethje will be Nurmagomedov’s toughest challenge, and there’s a lot of reasons to believe he will be. While Khabib has fought some experienced wrestlers and noted grapplers before, Gaethje is a former NCAA Division 1, All-American wrestler.

When you consider that, as well as the fact Gaethje has a nasty, nasty striking game, it’s hard to argue with Cormier’s view.

Further, while Cormier believes Khabib is focused and will be ready to go at UFC 254, you do have to wonder how the tragic loss of his father Abdulmanap, might impact his camp.