Derek Brunson scored an impressive win at UFC Vegas 5, in spite of, what Dana White believes was the doctor's mishandling of the fight's final moments.

Referee Herb Dean isn’t being scrutinized for how he called Saturday’s bout between Derek Brunson and Edmen Shahbazyan, but the cageside doctor is taking some heat, including some from Dana White. 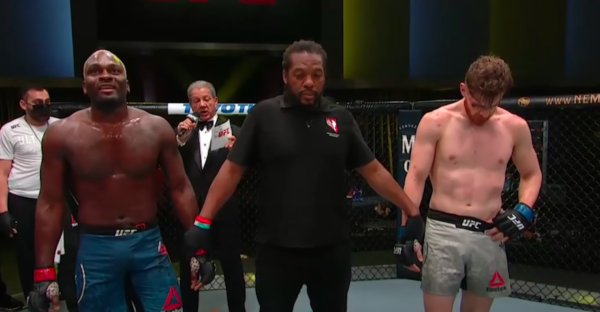 Brunson and Shahbazyan faced off in the main event of UFC Vegas 5, and in the opening round, both men landed some hard shots. Shahbazyan appeared to get the better of the exchanges, but in round two, Brunson continued to mix in his takedowns behind heavy punches.

Late in the frame, Brunson tagged Shahbazyan with some punishing punches and elbows from above. One of which, cut Shahbazyan open and as the horn went, the middleweight appeared to be seriously hurt.

Dean recognized this, and before he began round three, he had the doctor look at Shahbazyan again. After a somewhat prolonged discussion, the fight resumed, but it wasn’t long before Brunson started lighting up the 22-year-old again and Dean jumped in.

After the event, White relayed that he wasn’t thrilled with how the doctor had handled the situation (quotes via MMA Junkie).

“Shahbazyan looked like he was out at the end of that round,” White said. “I think that the doctor could have stopped … first of all, the doctor’s obviously inexperienced. I don’t know anything about the doctor, but I’ve never seen him before.”

“You’ve got Brunson, who ends that round strong, many could argue that fight could have been stopped there at the end of the round. I’m sure the ref thought that the guy would have time to go back,” White said.

“What you don’t do is talk to the guy for (expletive) 10 minutes while he’s hurt. You know what I mean? Either stop the fight or let him continue, but go.”

You’re letting the kid recover while you’ve got Brunson who did that work while he’s waiting for the bell to ring so that he can go in and finish the fight.

Pull the trigger one way or the other. Stop the fight or don’t.”

It’s hard to argue with anything White said here. Although, you could also question whether Shahbazyan’s corner misread the situation and should have called for the bout to be stopped.

Thankfully, Dean jumped in right away in round three and Shahbazyan didn’t take too much punishment.

The veteran referee was front-and-center in controversy at UFC Fight Island 3, as many believe he waited too long to stop the Francisco Trinaldo – Jai Herbert fight. Dean, however, has defended his call.