Chris Weidman admits his performance Saturday was "sloppy", but the former middleweight champ says he's headed in the right direction.

Chris Weidman didn’t leave the MMA world buzzing with a decisive win at UFC Vegas 6. But, that hasn’t changed the former middleweight champ’s mind he has another championship run left in him. 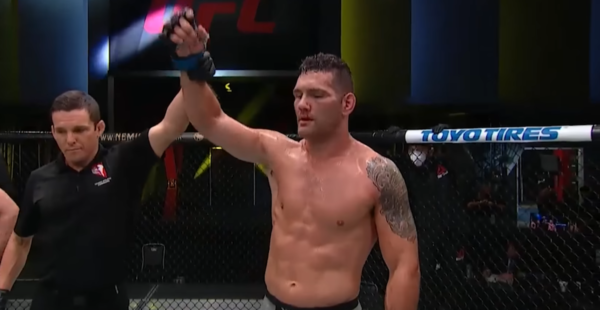 From the get go, it was clear that Weidman intended to lean on his wrestling in the fight. Although the decorated wrestler had some trouble getting the fight down at times, Weidman recorded five takedowns in them fight and controlled more of the action.

After 15 minutes, Weidman was awarded the decision win.

Following the bout, Weidman conceded that it wasn’t his best performance. But, considering he had only recorded one victory since 2015 prior to the bout, winning was the most important (quotes via MMA Fighting).

The weight was off. It turned into a sloppy fight. But it came down to that third round, I was able to dig deep and come up with the ‘W.’

“It was a scrappy fight. I’m just happy to get back inside the octagon and find a way to win. He was strong as hell.

He’s a scrappy guy. He hasn’t lost in six fights. It was good to get out there and start over again in the middleweight division.”

In addition, Weidman reported that he feels renewed, and ready to make another title run, as a result of the pivotal win.

“But I do think it was a step in the right direction to get a ‘W’ against a tough guy. I’m excited to get in there with some of these top tier guys at middleweight and really start making a statement.

I feel like I’m renewed and I got a fresh start here.”

“…To overcome that is a championship mindset. A big part of me pushing through and continuing to do what I do and with the confidence I have is to help inspire other people. Life is not going to turn out the way you want all the time.

You’ve got to be able to push through ,and ‘F’ the doubters and just believe in yourself. I’m not done showing the world what I’m capable of.

In those moments, just don’t back down. Don’t quit and just keep moving forward.”

So, if you’ve followed Weidman in recent years, you know he’s never lost confidence in his abilities to be a champ. Even when he dropped three straight fights between 2015 and 2017, or when he lost back-to-back bouts more recently.

It should be noted, of course, that all his defeats have come against top-tier fighters.

But, could we see Weidman make another championship run? It’s possible. After all, Weidman is a very well rounded fighter and he’s not that far removed from a submission win over top contender, Kelvin Gastelum.

That said, his latest win probably didn’t convince his doubters we’ll see Weidman rising to the top of 185 division.