This classic "Carol Burnett Show" skit puts Harvey Korman in an uncomfortable situation but the ending will tug at your heart strings.

Variety shows kept us entertained during the 1960s and 1970s. You never knew what the next skit was going to be about and that was the fun of it. In the 3rd season of her show, Carol Burnett decided to push up against the lines of the day by having the elevator man in her building as her special guest for dinner.

The problem is that the elevator man has a crush on her and she’s married. 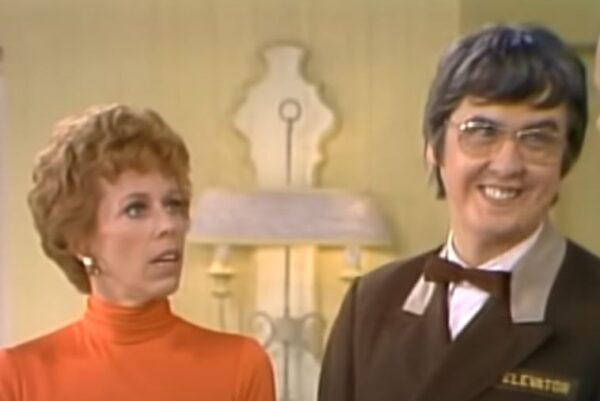 “The Carol Burnett Show” kept us entertained for 11 season. We all gathered around the television without concern about foul language. Even this “Carol and Sis: Dinner Invitation” skit was family appropriate as it dealt with an innocent crush and how to treat someone with respect.

It was just handled it in a hilarious way.

RELATED: Carol Burnett Tells Her Shrink About The Boy Who Ruined Her Life, Only To Find Out His Secret

Jim the elevator, played by Jim Connell, man knew more about Carol than her own husband Roger, played by Harvey Korman, did. He even knew her dress size. Jim was smitten to say the least.

He wasn’t at all put off by the married couple kissing in front of him. His love for Carol was so pure and innocent that he didn’t seem to notice and he certainly wasn’t jealous.

He was just thrilled to be with her! Harvey wasn’t too happy with the situation which made it even more hilarious.

Harvey and Carol attempted to push her sister onto Jim. But, the elevator operator only had eyes for Carol.

This is a very sticky situation. Jim told everyone in the building about his “date” with Carol. Of course, this only made Harvey even more irritated.

The embarrassed husband finally had enough and told off the lovestruck elevator man. Jim got his revenge though when he served up a heaping dose of guilt on the family that rejected his innocent feelings.

The video below is a classic Carol Burnett that will have you laughing!

I am not sure how they all kept a straight face!

To be honest, this skit could be an entire series. I am wondering what happened when Jim returned to the dinner party. This skit is both touching and funny at the same time.