Antonio Rogerio Nogueira tagged ‘Shogun’ Rua with some big shots, but the legend was unable to avenge his losses to his fellow Brazilian tonight at UFC Fight Island 3. 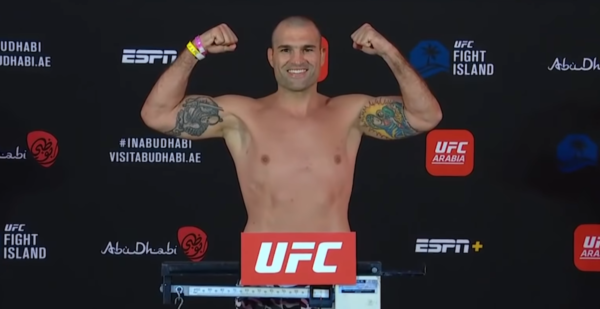 Rua came out pressuring and Nogueira looked to counter. Rua tossed in a couple of leg kicks. Rua blitzed in clinched up. Rua worked with some knees to the thigh before breaking free. Nogueira scored with a nice left not long after. Later in the round, it was Nogueira who was pressuring and Rua was circling away. Nogueira planted another hard left and Rua pushed him to the fence. Nogueira cracked Rua with another big left and ‘Shogun’ took him down.

Rua fired in a body kick moments in and momentarily clinched up. Nogueira countered another kick with a left. Rua fired back with a right hand and the fight fell to the deck, with Nogueira on top. ‘Lil’ Nog’ landed some shots from above but Rua worked his way out and up. Nogueira defended a TD attempt and launched a left back. Rua scored with another kick to the body, but Nogueira continued to move forward and fire punches.

Rua looked the worse for wear between the two as the round began. ‘Shogun’ pounded in another kick moments into round three. Rua planted another hard body kick and then a right, a couple of minutes in. ‘Shogun’ winged a couple of hard hooks and Nogueira returned with a left moments later. Rua scored with a check hook not long after and then took Nogueira down.

Rua scored with some shots from above and Nogueira started looking for a sweep. Close fight.

Two of three judges scored the fight for Rua, moving his record to 3-0 against Nogueira. Afterward, ‘Lil’ Nog’ confirmed that his fighting career is over.

Here are the results so far for UFC Fight Island 3 [1], which is taking place in Abu Dhabi.