Dan Ige hung in there, and kept firing shots, but Calvin Kattar's strikingulimately won out in the UFC Fight Island headliner.

Calvin Kattar ate some big shots from Dan Ige, but the featherweight’s striking delivered him a win in the main event of UFC Fight Island 1. 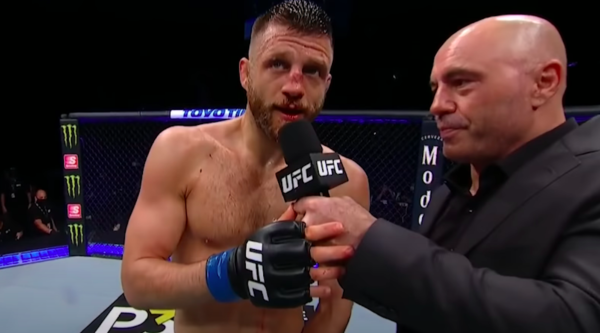 Ige threatened with a right and left hook several moments in. Moments later he did so again. Ige went to the body mid round and Kattar returned fire. Kattar dug to the body moments later and Ige shot in, but was unsuccessful and wound up on the floor. Ige popped back to his feet but ate a front kick to the body not long after.

Ige landed a body kick but Kattar caught and tripped the featherweight to the floor. Ige got back up, but took a hard shot to the body while doing so. Kattar charged in late in the round but ate a huge right. Kattar, unfazed, finished with a flurry.

Ige went to the body with a hook and Kattar stayed busy with his jab. Kattar scored with a big 1-2 but Ige scored moments later. Kattar’s nose was bloodied up after. Ige came hard with hooks again. Kattar just missed with a flying knee in the final minute and continued to move forward.

Round three saw Kattar pressuring again, and both fighters were content to stand and trade. Late in the round, Kattar blitzed in with a nice combo but Ige defended well. The volume in the round appeared to drop off compared to the first two frames. Kattar also had a cut by his right eye after the round.

Kattar continued to stick his jab in round four and Ige responded with a TD attempt. Kattar planted a hard punch but Ige ate it. Moments later, the fight spilled to the mat and Kattar fired down some shots from above. Ige, however, worked his way up and out.

Ige flurried later in the round, but Kattar defended well and Ige’s face was starting to show the effects of his opponent’s strikes. Kattar just missed with a big knee  before the round ended.

Heading into round five, Ige likely needs a finish to win the fight.Kattar was still moving forward in the final frame and was the busier of the two. Ige’s right eye was nearly closed as the round approached it’s end.

Ige turned up the pressure late in the fight, but Kattar countered with a knee and finished on top.

Not surprisingly, Katter was awarded the decision win.

Here are the results for UFC Fight Island 1, which took place on Yas Island in Abu Dhabi.