The fighters faced off with their respective opponents today, and not surprisingly, Kamaru Usman and Jorge Masvidal didn't exchange friendly greetings.

The official weigh-ins for UFC 251 are in the books, as are the fighter faceoffs, and you can watch the highlights below. 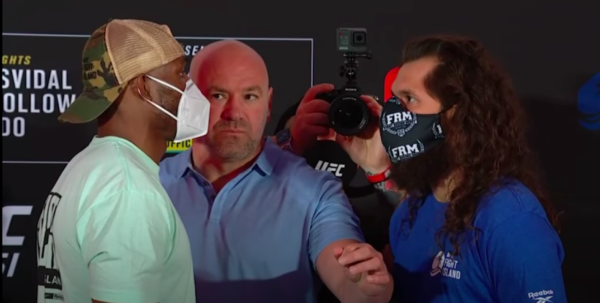 Kamaru Usman and Jorge Masvidal mean mug each other

If you’ve followed Usman and Masvidal over the preceding months, you know the welterweights have formed quite the rivalry. Since Masvidal has worked his way into title contention, the two have repeatedly fired verbal shots in each other’s direction.

The welterweight champ was booked to fight Gilbert Burns tomorrow, but after the latter tested positive for COVID-19, Masvidal agreed to the short-notice bout.

Max Holloway and Alexander Volkanovski also had a pretty intense staredown. The latter ended Holloway’s reign as featherweight champ in December, via a unanimous decision win.

You can check out the official weigh-in results for UFC 251 by clicking here. Saturday’s event is taking place on Yas Island in Abu Dhabi.