The Miz knew he was losing his push after dropping the WWE Championship, but there was not much he could do. Also, Henry Cejudo is showing interest in working for AEW.

The Miz On Losing His Push

The Miz [1] went from a member of The Real World on MTV to WWE superstar. After years of pursuing the pro wrestling business and taking part on Tough Enough, The Miz signed a contract.

At first, he needed lots of work. Eventually, he made major strides and looked poised for a push.

He won Money in the Bank [2] and successfully cashed-in against Randy Orton. A few months later and he pinned John Cena in the main event of WrestleMania 27.

A short time later, he dropped the WWE Championship and never regained the title. While speaking on Busted Open Radio [3], The Miz could see a change coming.

“I felt the momentum start going another way,” said The Miz. “When I lost the WWE Championship to John Cena, there was a kind of a role shift in the writing process, and I saw where I was going.”

“I was going to be used to develop new talent because I was just utilized for the past. Now, it’s time to make other people and I didn’t have the wherewithal to make sure that I was being made as well. I didn’t have the experience, and I think it took me a little while.”

The Miz would float in the main event scene, but found his most success as a mid card talent. He is drawing close to breaking a record for most Intercontinental Championship reigns.

Currently, he is teaming with John Morrison again. During their two runs together, they captured the tag titles on several occasions. 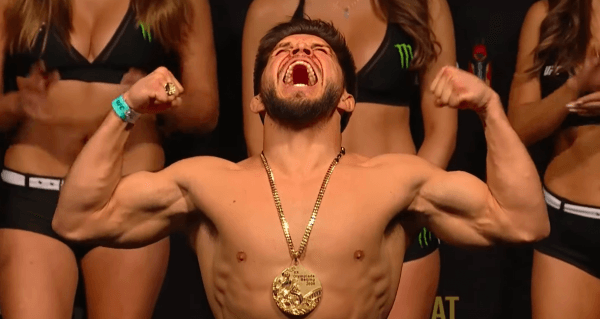 Henry Cejudo made a name for himself as a wrestler before transitioning into MMA. In a short time, he became one of the pound for pound best in the UFC.

He won gold in the UFC’s flyweight and bantamweight divisions. After successfully defending two titles, he retired a few months ago.

Now, people are wondering what is next. Cejudo has teased the idea of boxing and made a brief appearance for All Elite Wrestling.

Mike Tyson along with Henry Cejudo, Rashad Evans and Vitor Belfort, among others, just showed up on AEW Dynamite (pro wrestling). pic.twitter.com/6JhpWC1uUU [4]

“There’s so many options to me,” said Cejudo while speaking to Adam Glyn [6]. “Probably the wrestling [will happen first]. Then probably the boxing, but I meant it when I said I’m retired.”

“There’s a boatload of money that could bring me back, but more importantly than money for me is legacy. We’ve been in contact with AEW.”

“There’s a potential big pay-per-view event they might want to hold. There’s a lot […] there’s so many options. They all seem a little appetizing to me.”

When AEW brought Mike Tyson [7] in for two appearances, Cejudo appeared as part of his entourage. He got into a scuffle with some AEW stars before everyone was separated.

If Cejudo is done with MMA [8], then pro wrestling does seem like a strong possibility. AEW referenced Cejudo during the Tyson angle, so there might be more to the story.